Rage Against the Machine stood for power. They were all about the power the common people had, the power authorities abused, the power of music. The defining theme of this album is clear in every snare hit, every menacing bass riff. The politics may not hold much appeal for those looking to get their stomp on, but the music will make a believer out of you.

Some knowledge of the band’s catalogue was a requirement for guitarists and bassists at Greenwood Academy. It was expected that you’d know a couple of riffs at the least, probably Killing in the Name. Their songs are insanely good fun to play, technically demanding but not intricate, primal and brutal in their simplicity. The difficulty isn’t in imitating, but in replicating their sheer aural force. There’s a popular misconception that power is born only from volume and the number of instruments you can throw on a song, and while RATM certainly have volume in spades, their instrumentation is surprisingly sparse. The power comes from the passion with which they play, the tightness of their rhythm (recorded in an age before computers would align your performance into perfect time) and the inimitable sound of the album.

And this is one incredible sounding album. Find yourself a halfway-decent pair of headphones, turn it up and revel in the glory of brutal sound that doesn’t fall apart into mush when you dare to nudge that volume slider. It’s always crystal clear what’s going on, and it translates into grooves that just won’t quit.

Rage Against the Machine knew what they were about, and you don’t need to use your imagination to hear that power twenty years later.

Their 1992 debut is a grenade that keeps exploding; among Nineties albums, only Nevermind and The Chronic rival it for cultural impact. Rage made hip-hop-tinged funk metal the new rebel music, taking over the alienation beat from grunge slackers and making Marxist sloganeering seem badass.

Remastered to museum-clean standards, the reissued album comes with DVDs of live shows and music videos, plus demos that prove just how down and detailed the group had every song (even if Morello still couldn’t resist changing solos). Rage were machinelike, yes, but built to change worlds.

The first DVD includes music videos and live footage from a 1997 VHS compilation as well as all of Rage’s free concert at London’s Finsbury Park in June 2010, which the band threw to thank British fans for their Facebook crusade to make the track “Killing in the Name” the Number One song in the U.K. during Christmas 2009. The second DVD will have more live footage shot between 1991-94, including the group’s first ever live show at Cal State Northridge in October 1991. 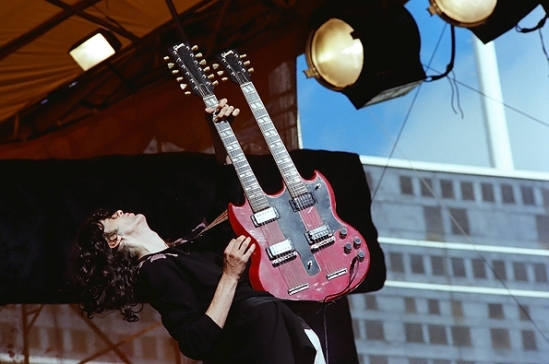 Oakland – Jimmy Page plays his guitar with a violin bow during a Led Zeppelin concert, circa 1970s.

Morrissey visited the Late Show With David Letterman last night to set the record straight, performing “Action Is My Middle Name” with characteristic theatricality. It was a prelude of sorts to the dapper singer resuming a U.S. tour that he cut short last fall, though one song wasn’t quite enough time for Morrissey to unbutton his jacket, never mind rip open his shirt or crack wise to the audience. Come to think of it, “Action” is a fitting middle name for Steven Patrick Morrissey.

Morrissey will be performing at the Gilman Opera House of the Brooklyn Academic of Music (BAM) on January 11. Check our upcoming concerts 2013=NYC post for tickets availability. This guy is a great singer/songwriter and performer. Welcome back to NYC, Morrissey!

Apocalyptica, the Finland based cello metal band, has returned with their latest studio album, 7th Symphony. Like their last effort, Worlds Collide, the new album features a mix of instrumentals and songs with guest vocalists. While a very good album overall, at times the ten tracks struggle to maintain production and songwriting congruity.

The first single off the album, “End of Me,” features Gavin Rossdale of Bush. It’s a catchy tune with a radio-friendly riff. Unfortunately, Rossdale has lost his Bush-era edge (pre-reunion). The delivery is too smooth and lacks his well-known gravely style. The song’s production is also pretty thin, which is only really noticeable when the next track, “Not Strong Enough,” kicks-in.

Brent Smith of Shinedown takes the vocalist helm for “Not Strong Enough.” Smith’s vocals on this song are incredible, and possibly some of the best he’s ever done, and that is saying something. The production of the track is superb. Even the flatulent cello distortion in the second verse does not detract too much from the overall quality of the track.

The song “Broken Pieces” features Lacey Mosley (Sturm) of Flyleaf. This is another strong track on the album. The production on Mosley’s vocals crisp and the vocal doubling was done very well. Mosley sounds terrific as always.

By the time “Bring Them to Light,” featuring Joe Duplantier of Gojira, came around, my ears were fairly fatigued due to some mid-range production equalization issues, so it took a few listens before the song grew on me. At first it seems like a toss-away metal-core track because Duplantier’s performance sounds over the top and in your face. But if you listen closely to the nuances of what he’s vocalizing and how, it becomes very interesting. The track descends into a kind of musical and lyrical madness before a calming and peaceful ending.

The instrumental tracks are OK. “At the Gates of Manala” is a seven minute aggressive headbanger, with good changes to keep it interesting. “2010″ features Slayer’s Dave Lombardo on drums. Lombardo kicks ass on this track, but the song takes a full minute to develop into anything, and the drums eventually get buried in over-cooked cello effects, including what sounds like a talkbox.

There are two primary issues with 7th Symphony that I previously alluded to. First, the production has some core issues related to equalization, or mastering… something. The three primary instruments each have the same frequency response range, so after six or seven tracks, my ears were cooked. Big problem for people like me who try to listen to the entire album. Less of a problem for those just buying individual tracks.

The other issue has to do with the songs themselves. The guys in this band are very talented and are able to created some very compelling heavy rock music. However I am not convinced that they are good enough composers to successfully put together an entire album of mostly instrumental songs, unless they take a foray deeper into progressive metal or classical realms. The biggest arrow in my quiver to support that opinion is how much more enjoyable the tracks with vocals are compared to the instrumentals. Even the band (or label) chooses those tracks as the singles.

“At the Gates of Manala”
“End of Me” (ft. Gavin Rossdale of Bush)
“Not Strong Enough” (ft. Brent Smith of Shinedown)
“2010″ (ft. Dave Lombardo of Slayer)
“Beautiful”
“Broken Pieces” (ft. Lacey Mosley of Flyleaf)
“On the Rooftop with Quasimodo”
“Bring Them to Light” (ft. Joe Duplantier of Gojira)
“Sacra”
“Rage of Poseidon”