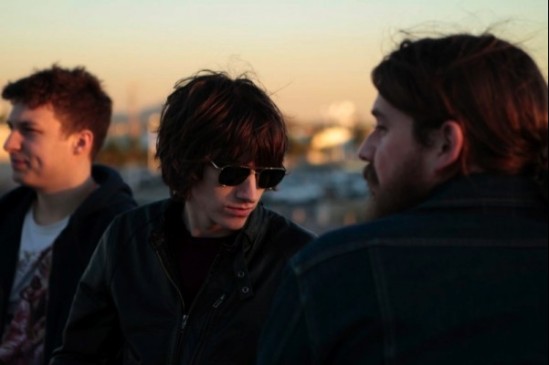 Alex Turner: “Last year I was trying to come to terms with the idea that I’m a songwriter. I’ve gotten into country music, which I never really had a connection with or understood before. But someone like
Townes Van Zandt is amazing — that’s what music’s all about, when you hear something and you don’t really have a choice but to think, ‘Oh fuck, all right, I’m going there then.’ That’s what I got with his records.”

The band have released four studio albums: Whatever People Say I Am, That’s What I’m Not (2006), Favorite Worst Nightmare (2007), Humbug (2009) and Suck It and See (2011), as well as one live album At the Apollo (2008). The band’s debut album became the fastest-selling debut album in British music history, surpassing Oasis’ Definitely Maybe and remains the fastest-selling debut album for a band in the UK. The band have won five Brit Awards—winning Best British Group twice, and have twice been nominated for Grammy Awards.

Last year Turner confirmed on 16 February that the band had recently recorded a new song, to be released before summer, and will be returning to the studio over the summer to record. Turner also discussed the direction in which the band were headed regarding the sound of their next album, saying that it would bear more similarities with the “dirty side” of  “Suck It and See” and songs such as “Don’t Sit Down Cause I’ve Moved Your Chair”.

On 26 February, the band released a brand new song titled “R U Mine?” on their YouTube channel. On 4 March, it went to No. 23 on the UK Singles Chart on downloads alone. On 21 April, the song was released as a single, with the track “Electricity” as a b-side, released additionally for the Record Store Day.

On 17 September, internet rumours suggested that the band were about to begin recording for their 5th album, in the Joshua Tree desert in California. The rumours were confirmed true by Matt Helders’ mother when she tweeted: “I don’t know if it helps to clear things up but lads are in the desert!”

Arctic Monkeys announced, on 27 November, their first live appearances for 2013 at various European festivals, indicating they will go on tour with their upcoming album 2013. So far, Arctic Monkeys have been confirmed for Open’er Festival, where they will perform on July 4, 2013, and Super Bock Super Rock Festival, where they will perform on July 18, 2013. Rumors suggest that these festivals will be practice for an upcoming album tour.

Turner has maintained a very private life, and shunned media publicity when declared the Coolest Man On The Planet by NME magazine in December 2005.

The Arctic Monkeys played the historic Apollo Theater in NYC. The band had a great welcome. Located in Harlem, the Apollo Theater was one of the most important centers of black culture in the twentieth century and continues to this day to be a wealth of innovative programs and artistic greatness.

Arcade Fire, the indie rock band based in Montreal, Quebec, Canada, are selling their converted church recording studio. The band has tweeted a real estate listing for Farnham, Quebec’s Petite Église, where they recorded Neon Bible and The Suburbs. The 15,751 square-foot space sports three bedrooms, a large nave, a laundry room, and a kitchen-dining room, but the recording equipment appears to have been removed.

The band revealed to Rolling Stone last October that they had relocated to a new recording studio to work on their new album after the roof of Petite Église began to collapse. The band purchased Petite Église in 2005, installing beds in the basement and mixing boards on the upper floors. They’ve also opened up the studio to Beirut, Owen Pallett and other musicians over the years.

On Friday (Jan. 18) the band tweeted the following: “Anybody want to buy a church?” The tweet also contained a link to a listing for their church studio located in Farnham, Monteregie just outside of Montreal, Quebec, which was built back in 1850.

“Very private church located on a quiet side street of village,” the listing describes the church studio as. “The entire volume of the nave is intact, kitchen and dining room adjoining the nave” are some of the details about the building, which has a “full height basement” with three bedrooms and two bathrooms that were renovated back in 2006.

“Charming church which housed a small concert hall, followed by a recording studio also offering accommodation,” the listing adds. “Its architecture makes it a perfect location for an artist’s studio, a place of worship, a cultural, community or other organization.”

The only drawback might be the fact the roof needs to be replaced at a cost estimated from $24,300 to $44,200 depending on the materials used. The building — which was assessed at $241,600 in 2012 — will also come with rods and curtains of the nave, pews, a dishwasher, stove, refrigerator, a wall air conditioning unit and alarm system.

The group, who are reportedly releasing a new studio album later this year, also took time to throw their support behind NBA player (and former Toronto Raptor) Matt Bonner and a drive to help Bonner compete in the NBA All-Star Game three-point shot competition.

“There’s so much injustice in the world that we can’t do anything about, but this is something we can change,” the band tweeted on Friday with the hashtag #LetBonnerShoot. Another tweet also included a link to the letter Matt Bonner’s brother Luke penned in order to get Matt into the competition.

In other news, the group announced last week they’ll be participating in some form at Kanpe Kanaval in Montreal next month, a celebration based on the Haitian festival. There’s no word on the event’s site if the group are actually performing but 50 VIP tickets are for sale which enable you to meet the group. They’re being offered at $400 with all proceeds going to KANPE.

Arcade Fire released their last studio album The Suburbs in 2010, which earned them a Grammy Award in 2011 for album of the year.

Their album ‘Funeral’ is included in the Rolling Stone’s 100 Best Albums of the 2000s. Loss, love, forced coming-of-age and fragile generational hope: Arcade Fire’s debut touched on all these themes as it defined the independent rock of this decade. A rich, folkie musicality, the band made symphonic rock that truly rocked, using accordions and strings as central elements rather than merely as accessories, with a rhythm section that never let up.

Published on Nov 22, 2010
Taken from the short film: “Scenes From The Suburbs”