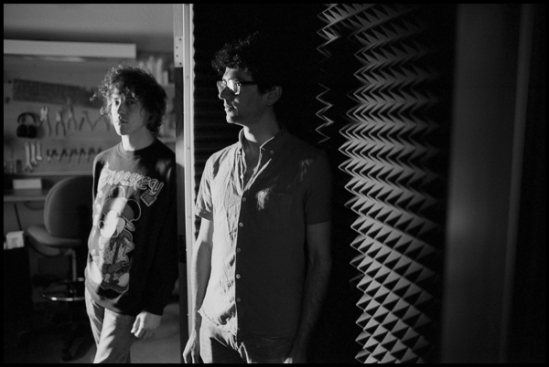 Andrew VanWyngarden and Ben Goldwasser of MGMT in the studio.
Photo: Danny Clinch

MGMT’s Long Strange Trip: Inside Their Most Experimental Album Yet

How the psychedelic duo almost lost their minds

MGMT have released a new trailer for their self-titled third LP, out September 17th on Columbia, that features snippets of five new tracks, an NSA wire tap and one angry possum in a bathroom. Frontman Andrew VanWyngarden encounters the beast while brushing his teeth, kicking off a peculiar day that later finds his cohort, Benjamin Goldwasser, knifing open a speaker cabinet and discovering a suspicious looking beetle that seems to be spying on them. The bug (get it?) doesn’t belong to the snooping NSA, though, which means, as one agent explains with extreme gravity, “The Reptoids have heard the new MGMT album.” Things get even weirder when the band hops on a bus to get to the bottom of these nefarious doings — but it looks like we’ll have to wait and see if there’s a part two to this story.

Not long ago, something funny started to happen inside the tawny, shaggy head of MGMT’s Andrew VanWyngarden. He was in upstate New York with bandmate Ben Goldwasser, recording their third album (MGMT, due out September 17th) in a rustic room surrounded by keyboards, drum machines and sequencers – working 12-hour days for weeks on end. “Weird things would happen to me up there,” says the singer, sitting in a trendy Italian restaurant in New York’s East Village. “I had total mental breakdowns sometimes.” His solution: “I was like, ‘I’m gonna go in the grocery store, and if there’s a flier up that says FREE KITTENS, I’m gonna get one.'” He shows me a photo of his new cat on his phone.

Since their earliest dorm-room jam sessions at Wesleyan University, VanWyngarden and Goldwasser have reveled in a quirky, subversive approach to rock stardom. They took weeks to decide whether to sign with Columbia Records when the label made an offer in 2006. “We kind of treated it like a joke, the way we were treating most things at that point,” says Goldwasser, who had been working construction. “We were a little scared,” VanWyngarden admits. When they did sign, it took them a while to get used to being part of the music industry. “So many musicians have this really commercial sensibility about everything,” says Goldwasser. “That made me really disgusted. Looking at music as a product, talking about what we were doing like a brand? We had never thought about music that way.”

Then came the lackluster public response to their weird, arty second LP, 2010’s Congratulations. “If you want to see the most uncomfortable people in the world,” says VanWyngarden, “watch our red-carpet interviews at the Grammys in 2010.” Some blamed drugs for the duo’s majorly psychedelic detour; while they have nothing against drugs per se (VanWyngarden has fond memories of tripping in a hotel room during a New England sleet storm), the criticism got under their skin. “It got out of control,” says VanWyngarden. Goldwasser says their European tour for Congratulations is the worst memory of his life with the band: “I was thinking, like, ‘What am I actually doing right now?'”

That the label still trusted them enough to leave them to their own devices for the follow-up came as a relief. MGMT is their most experimental LP yet – electronic music that’s definitely not meant for dancing. “I don’t even know if it’s music we would want to listen to,” VanWyngarden says proudly. “It’s just what’s coming out of us. We didn’t make a single compromise.”
For their follow-up to 2010’s experimental, divisive Congratulations, Ben Goldwasser and Andrew VanWyngarden went even weirder – immersing themselves in synths, drum machines and Eighties house records. You can hear those influences in the electronic throb pulsing through avant-pop jams like “Your Life Is a Lie” and “Plenty of Girls in the Sea.” “We used to think of crazy, improvised experimentation as a fun thing we’d do on the side,” says VanWyngarden. “But this time around, we thought we might as well embrace it.”