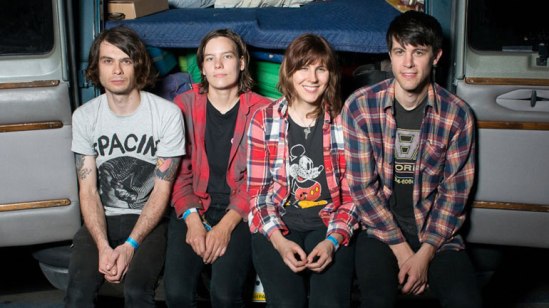 Eyes down for Philadelphia neo-shoegaze quartet, as approved by Grohl and Novoselic.

Philadelphia-based Bleeding Rainbow started life as his-and-hers duo Reading Rainbow until the partnership of Sarah Everton and Rob Garcia revised their moniker and expanded to a four-piece on their 2013 LP, Yeah Right. (The story that Sleater-Kinney’s Carrie Brownstein prompted the name change with a single withering remark may or may not be apocryphal…)

So You Know, a taster from their forthcoming album, Interrupt (out on Kanine Records on February 24), employs their expanded instrumental mass to propel a gauzy three minutes of woozily atmospheric guitar rock that fits the Ride-MBV paradigm snugly, but sidesteps the scuzzier connotations of ’80s UK indie by foregrounding Sarah Everton’s coolly beguiling voice: a cleaner, more modern take on the shoegaze allure of Bilinda Butcher or Slowdive’s Rachel Goswell.

Famous fans of the band include both Dave Grohl and Kris Novoselic, apparently. See if you agree with the Nirvana legends, listen to So You Know here: