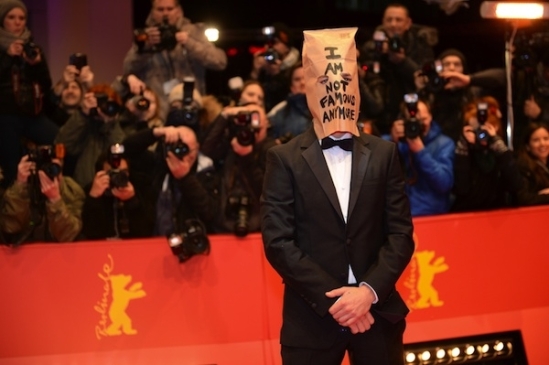 Actor Shia LaBeouf arrives on the red carpet for the screening of the film ‘Nymphomaniac Volume I (Long Version)’ at the 64th Berlinale Film Festival in Berlin on February 9th, 2014.

Shia LaBeouf made quite an impression while promoting his new film at the Berlin International Film Festival this weekend. The actor stormed out of a press conference for Lars von Trier’s Nymphomaniac: Volume I after giving a bizarre answer to a single question on Sunday, and later donned a paper bag on his head for the red-carpet premiere of the film, according to the Hollywood Reporter.

About ten minutes into the press conference, LaBeouf was asked what it was like to shoot a movie with so many sex scenes, to which he answered cryptically: “When the seagulls follow the trawler, it’s because they think sardines will be thrown into the sea. Thank you very much.”

LaBeouf, who attracted some derision last year for allegedly plagiarizing comic artist Daniel Clowes in his directorial debut, HowardCantour.com, and then plagiarizing his apology for doing so, was quoting French soccer star Eric Cantona, who delivered the same line during a press conference in Ken Loach’s film Looking For Eric. After making the statement, LaBeouf left the press conference.

Later the same day, LeBeouf turned up for the gala premiere of Nymphomaniac dressed in conventional formalwear, aside from a paper bag on his head. Scrawled in fat black letters across the bag (which also sensibly featured holes cut out for the actor’s eyes) were the words “I am not famous anymore.” LaBeouf has been repeatedly making the same all-caps declaration on Twitter for the past month. He also announced last month on Twitter that he was retiring from “all public life.” 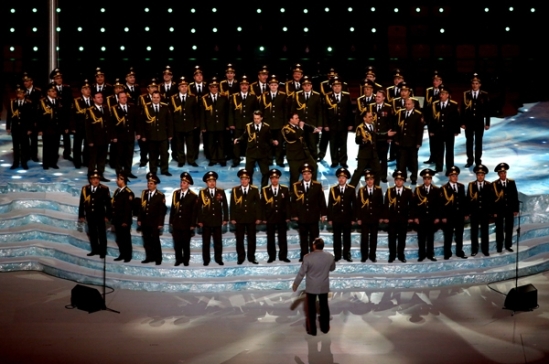 The Ministry of Internal Affairs choir sings “Get Lucky” during the Opening Ceremony of the Sochi 2014 Winter Olympics.

Just when you thought “Get Lucky” couldn’t get any more universal: Earlier today, the Russian Police Choir delivered an incredible rendition of the Daft Punk disco smash as part of the opening ceremonies at the 2014 Winter Olympics in Sochi.

As one would expect, the all-male choir takes a more proper, slightly less funky approach to the most ubiquitous song of 2013. A pair of vocalists take turns channeling their inner Pharrell on lead vocals with musical theater panache, while a horde of solemn backing singers add Gregorian-style touches (including an amazing break at the 1:30 mark). The musical apex comes around the 2:40 mark, as one particularly excited singer delivers the most bizarre vocoder-filled performance ever captured on tape.

There are so many meme-worth moments in this performance, it’s impossible to list them all. But it’s definitely worth noting the officers’ hilarious “old, goofy man dancing at a wedding reception” dance moves. (Another incredible highlight: the puzzled look on the older policeman’s face in the right corner.)

This is not the first time the Russian Police Choir has covered the track. Last year, the group released a video of their cover featuring the military men dancing/awkwardly standing on a smoke-filled set which is, as you can imagine, also a must-watch.

Watch the performance at the NBC Olympics site.