A casing carrying cluster munitions that landed in a shed. Press officers for the Ukrainian military denied that their troops had used cluster weapons in the conflict.Credit Sergey Ponomarev for The New York Times

The Times finally admits that “The [Ukrainian] army’s use of cluster munitions, which shower small bomblets around a large area, could also add credibility to Moscow’s version of the conflict, which is that the Ukrainian national government is engaged in a punitive war against its own citizens.”

DONETSK, Ukraine — The Ukrainian Army appears to have fired cluster munitions on several occasions into the heart of Donetsk, unleashing a weapon banned in much of the world into a rebel-held city with a peacetime population of more than one million, according to physical evidence and interviews with witnesses and victims.

Sites where rockets fell in the city on Oct. 2 and Oct. 5 showed clear signs that cluster munitions had been fired from the direction of army-held territory, where misfired artillery rockets still containing cluster bomblets were found by villagers in farm fields.

The two attacks wounded at least six people and killed a Swiss employee of the International Red Cross based in Donetsk.

If confirmed, the use of cluster bombs by the pro-Western government could complicate efforts to reunite the country, as residents of the east have grown increasingly bitter over the Ukrainian Army’s tactics to oust pro-Russian rebels.

Further, in a report released late Monday, Human Rights Watch says the rebels have most likely used cluster weapons in the conflict as well, a detail that The New York Times could not independently verify.

Rebels extracting a casing that was carrying cluster munitions in Ilovaysk, Ukraine, on Monday. Credit Sergey Ponomarev for The New York Times

The army’s use of cluster munitions, which shower small bomblets around a large area, could also add credibility to Moscow’s version of the conflict, which is that the Ukrainian national government is engaged in a punitive war against its own citizens. The two October strikes occurred nearly a month after President Petro O. Poroshenko of Ukraine signed a cease-fire agreement with rebel representatives.

“It’s pretty clear that cluster munitions are being used indiscriminately in populated areas, particularly in attacks in early October in Donetsk city,” said Mark Hiznay, senior arms researcher at Human Rights Watch, in emailed comments after the report was completed. “The military logic behind these attacks is not apparent, and these attacks should stop, because they put too many civilians at risk.”

Press officers for the Ukrainian military denied that their troops had used cluster weapons during the conflict and said that the rocket strikes against Donetsk in early October should be investigated once it was safe to do so. They also said that rebels in the area had access to powerful rocket systems from Russia that could fire cluster munitions.

However, munition fragments found in and around Donetsk and interviews with witnesses indicate that the cluster munitions that struck Oct. 2 and Oct. 5 were most likely fired by Ukrainian troops stationed southwest of the city, according to Human Rights Watch and a review by The Times. Witnesses there reported seeing rocket launches from those troops’ positions toward the city at times that coincide with the strikes.

Human Rights Watch says in its report that cluster weapons have been used against population centers in eastern Ukraine at least 12 times, including the strikes on Donetsk, during the conflict, and possibly many more. The report said that both sides were probably culpable, in attacks that “may amount to war crimes” in a grinding conflict that has claimed at least 3,700 lives, including those of many civilians.

The report, which included incidents uncovered by The Times, says there is “particularly strong evidence” that Ukrainian government troops carried out the two October attacks against Donetsk.

An August cluster-munitions attack on the village of Starobesheve, which was in Ukrainian Army hands, was probably carried out either by pro-Russian rebels or by Russian troops, the report says.

Beginning in October, a series of strikes against Donetsk using certain cluster weapons fired from Uragan rockets came from the southwest of the city. The timing of at least two rocket launches from the same location corresponded to cluster munition strikes that hit Donetsk from a southwesterly trajectory, according to Human Rights Watch and The Times.

Shelling of cities has been common in the conflict, and the cease-fire agreement has not ended the violence. A chemical plant on the outskirts of Donetsk was struck Monday, and the resulting shock wave shattered windows for miles around. 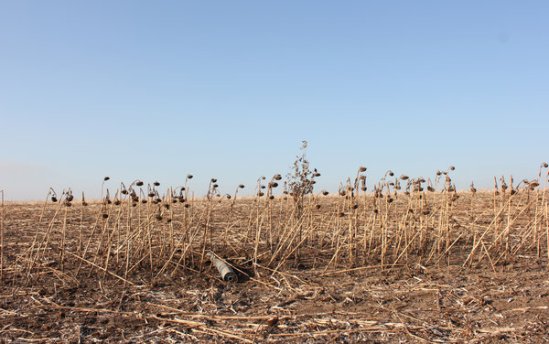 A rocket with an intact payload of cluster munitions lies in a field in Novomikhailova, Ukraine.Credit Andrew Roth/The New York Times

On the morning of Oct. 5, Boris V. Melikhov, 37, was chopping wood outside his house in the Gladkovka neighborhood of Donetsk when he heard the loud clap of an explosion from the street.

His first sensation was “a strong push in the back,” and he sprawled onto the grass. More explosions followed, showering Mr. Melikhov with dust and dirt. Unable to stand, he crawled toward a spigot in the garden, bleeding profusely and desperate for water.

“I felt the blood running down my back, down my leg,” he recalled in an interview last week from his bed in a hospital, where his uncle took him after the attack. Doctors there found several identical metal fragments in his leg, chest, shoulder and hand.

Hundreds of such fragments, each about the size of a thumbtack, were sprayed out by at least 11 cluster bomblets that exploded on Mr. Melikhov’s street that morning. The 9N210 bomblets are carried in surface-to-surface Uragan (Hurricane) rockets that are fired from the backs of trucks and have a range of roughly 22 miles.

Part of one of the rockets smashed into a street a few blocks away, and the impact crater indicated it had come from the southwest.

The same morning, sunflower farmers near Novomikhailovka, a small village about 20 miles southwest of Mr. Melikhov’s house, saw rockets sailing almost directly overhead toward Donetsk. Local people said in interviews that the army had been launching Uragan rockets from there for more than a week.

“Trust me, when it is day after day after day, you get to know your Grad launches from your Uragan launches,” said one farmer, who asked not to be named for fear of retribution for discussing Ukrainian military positions. Grads are another kind of rocket used by both sides.

Villagers said they had also seen rockets with cluster bomblets up close. They said several of the rockets misfired on Oct. 3 and landed in the sunflower fields south of the village with their payloads intact.

A reporter photographed three malfunctioned rockets there, and two of them contained submunitions like those that injured Mr. Melikhov. The same type of weapon struck the Donetsk headquarters of the Red Cross on Oct. 2 in an attack that killed an administrator, Laurent DuPasquier, 38.