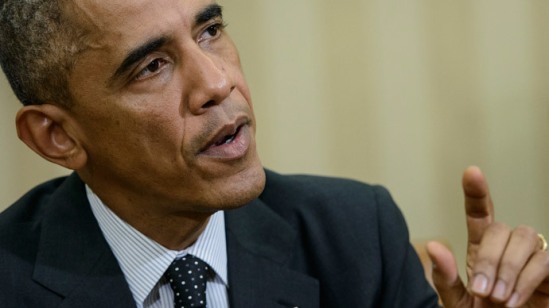 The letter, posted on TheCommunity.com, also asked for a concrete plan to close secret international “black site” prisons – used by the US to hide, hold, and interrogate post-9/11 detainees – as well as the US military prison at Guantanamo Bay, where many War on Terror captives languish with few or inconsistent legal maneuvers, if any at all, at their disposal.

“In recent decades, by accepting the flagrant use of torture and other violations of international law in the name of combating terrorism, American leaders have eroded the very freedoms and rights that generations of their young gave their lives to defend,” the laureates wrote.

“They have again set an example that will be followed by others; only now, it is one that will be used to justify the use of torture by regimes around the world, including against American soldiers in foreign lands. In losing their way, they have made us all vulnerable.”

The letter called on Obama, winner of the 2009 Nobel Peace Prize after less than a year in the White House, to follow principles of international law outlined in the UN Convention Against Torture and the Geneva Conventions.

The US Senate Intelligence Committee’s $40 million investigation into the CIA’s Rendition, Detention, and Interrogation Program – which was active from September 11, 2001 to 2006 – has found that the spy agency purposely deceived the US Justice Department to attain legal justification for the use of torture techniques, among other findings. The investigation and subsequent crafting of the report ran from March 2009 to December 2012.

Of that 6,000-page investigative report, the public will only see a 500-page, partially-redacted executive summary that is in the process of declassification.

According to sources familiar with the unreleased report, the CIA, and not top officials of the George W. Bush administration, are blamed for interrogation tactics that amount to torture based on international legal standards.

The report outlines 20 main conclusions about the CIA’s post-9/11 torture program which, according to the investigation, intentionally evaded White House, congressional, and intra-agency oversight.

The White House is reportedly wrestling over how to interpret a ban on “cruel, inhuman or degrading treatment” ahead of a meeting in Geneva next month concerning the United Nations charter on torture.

According to the New York Times, the Obama administration remains divided over what stance a Washington delegation will officially take at the UN-sponsored Committee Against Torture panel early next month in the Swiss city.

Although Barack Obama said before and after being elected to the White House that United States officials should never engage in torturous activity, Times national security journalist Charlie Savage reported on Sunday this week that administration officials might formally adopt another stance — one on par with the policies of Obama’s predecessor, George W. Bush — when the panel convenes in a couple of weeks.

The Times reported that the attorneys who answer to the president are conflicted over whether or not the White House should revisit the Bush administration’s interpretation of a UN treaty, the likes of which authorized the use of enhanced interrogation tactics, like waterboarding and sleep deprivation, on individuals detained by military and intelligence agencies in the aftermath of the September 11, 2001 terrorist attacks at facilities such as the Guantanamo Bay detention center and CIA so-called “black sites.”

The upcoming meeting will be the first one of Obama’s presidency, Savage acknowledged, presenting the commander-in-chief with a rare opportunity to speak of the UN Convention Against Torture, a treaty that since the 1980s has aimed to ensure prisoners the world over aren’t subjected to inhumane conditions.

In Sunday’s report, Savage wrote that Obama, then a US senator, spoke out adamantly against Pres. Bush when it was revealed in 2005 that his administration had been interpreting the UN treaty in a manner that they argued made it acceptable for CIA and Pentagon officials to disregard the prohibitions against torture if they weren’t on American soil.

Obama the president later condemned that reasoning with an executive order “ensuring lawful interrogations,” Savage added, although next month’s meeting may change that.

“But the Obama administration has never officially declared its position on the treaty, and now, President Obama’s legal team is debating whether to back away from his earlier view,” Savage wrote. “It is considering reaffirming the Bush administration’s position that the treaty imposes no legal obligation on the United States to bar cruelty outside its borders, according to officials who discussed the deliberations on the condition of anonymity.”

“State Department lawyers are said to be pushing to officially abandon the Bush-era interpretation,” Savage added, which would simply continue to let the 2009 Obama-signed executive order stand as Washington’s official word and further ensure that American officials are obligated to adhere to the torture treaty regardless of where in the world they are located.

Other attorneys, he added, have a different idea of what to do at next month’s meeting, however. “But military and intelligence lawyers are said to oppose accepting that the treaty imposes legal obligations on the United States’ actions abroad,” Savage wrote. “They say they need more time to study whether it would have operational impacts. They have also raised concerns that current or future wartime detainees abroad might invoke the treaty to sue American officials with claims of torture, although courts have repeatedly thrown out lawsuits brought by detainees held as terrorism suspects.”

Should those arguing on the latter side provoke, then the current administration could soon find itself agreeing with past policies that continue to be controversial nearly a decade after the Bush White House’s use of torture started to surface.

“Many foreign political leaders and non-governmental organizations have called for members of the Bush administration, including Bush himself, to face prosecution for allowing the abuse of detainees in US custody during the course of the US campaign against Islamic militant groups spurred by the 9/11 attacks,” Mark Hanrahan wrote for the International Business Times on Sunday. “The Bush administration, which launched the wars in Iraq and Afghanistan, had to contend with a number of allegations it allowed US officials to use torture against detainees during the course of its campaigns,” including the infamous Abu Ghraib prison scandal in Iraq.

If the Pentagon and CIA attorneys prevail, then Washington could once again interpret the UN treaty in a manner that allows those same torturous practices to be performed on detainees once against, as long as any such instances occur abroad.

Last week, McClatchy news service reported that a classified $40 million probe launched by the Senate to investigate the CIA’s Bush-era detention and interrogation program concludes without holding any administration officials responsible for the scandals at Abu Ghraib and other facilities that to this day remain a major scar on the presidency.

“This report is not about the White House. It’s not about the president. It’s not about criminal liability. It’s about the CIA’s actions or inactions,” a person familiar with the report told McClatchy. “It does not look at the Bush administration’s lawyers to see if they were trying to literally do an end run around justice and the law.”