Pepe Escobar is the roving correspondent for Asia Times/Hong Kong, an analyst for RT and TomDispatch, and a frequent contributor to websites and radio shows ranging from the US to East Asia.

Anyone who believes Washington is deeply enamored of ‘democracy’ in Ukraine must hit eBay, where Saddam Hussein’s WMDs have been found, and are on sale to the highest bidder.

Or pay attention to the non-denial denials of the Obama administration, which swears on a daily basis there’s no ‘proxy war’ or Cold War redux in Ukraine.

In a nutshell; Washington’s bipartisan Ukraine policy has always been anti-Moscow. That implies regime change whenever necessary.

As the European Union (EU), geopolitically, is nothing but an annex to NATO, what matters is NATO extending its borders to the Ukraine. Or at least Western Ukraine – which would be a valuable consolation prize.

This is a purely military-centric game – the logic of the whole mechanism ultimately decided in Washington, not in Brussels. It’s about NATO expansion, not ‘democracy’. When neo-con State Department functionary Victoria Nuland had her 15 seconds of fame recently, what she actually meant was “We’re NATO, F**k the EU.” No wonder there will be an urgent NATO Defense Ministers meeting in Brussels on Wednesday, centered on Ukraine.

No one will ever read that in US corporate media – or in academia for that matter. Harvard Professor Francis Boyle talking to Voice of Russia, or Princeton’s Stephen Cohen in a recent article for the Nation, are glaring exceptions.

Every informed analyst knows the mastermind of this ‘policy’, since the 1970s, is Zbigniew ‘The Grand Chessboard’ Brzezinski. Dr. Zbig was US President Barack Obama’s mentor at Columbia and is the Talleyrand of the Obama administration’s foreign policy machine.

He may have softened up a notch recently, arguing that although the US must remain the supreme power across Eurasia, Russia and Turkey must be seduced by the West. Yet his historic Russophobia was never diluted.

‘Saint’ Yulia is back

As we’re now on the road (again) of regime change in Ukraine, that seems not such a lousy deal for only $5 billion – the amount volunteered by neo-con Nuland herself. Compare it to other lavish Bush-Obama continuum foreign adventures, from Afghanistan and Iraq to Syria. Yet expect major bumps ahead. 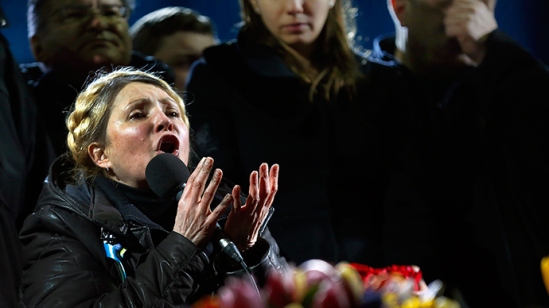 Most arguably progressive, as well as some rabidly right wing, Google generation denizens in Western Ukraine and in Kiev seem to entertain the notion that the country, under regime change, will be accepted as an EU member, they will get an EU passport, and will find a good job in Europe, just as Polish plumbers and Romanian restaurant managers did.

Well, not really. If only they could board an EasyJet and see with their own eyes what’s going on, job market-wise, in southern Europe or in London for that matter, now terrified of a horde of Eastern Europeans seizing English jobs.

As for the ultra-nationalists and frankly neo-fascists – totally anti-EU – the only thing they care about is to get rid of the Russian Bear’s embrace. And then what?

In the West’s ardor for ‘democracy’ it’s so easy to forget that Western Ukrainian fascists were aligned with Hitler against the USSR. It’s their descendants that have been in the forefront of the hardcore violence last week. And Right Sector still insists they will continue to ‘protest’. In this sense they may not be Washington’s preferred puppets; they are just momentarily useful patsies.

As for former Ukrainian Prime Minister Yulia Tymoshenko – now elevated in the West to the status of a blonde Mother Teresa – she has called the Maidan (Independence) Square protesters “liberators.” They may soon liberate themselves from her – after highly corrupt ‘Saint’ Yulia runs for president next May.

The Ukraine that works – in the east and south – is made up of historic Russian provinces, think Kharkov, the Black Sea, Crimea. The country’s GDP is roughly $157 billion. That’s one fifth of Turkey (which may become the new Pakistan). As it is, Ukraine holds no economic value whatsoever to the West (even less if it becomes the new Syria). The only ‘positive’ would be NATO’s warped strategic advance.

Anyone who believes a mired-in-crisis EU will buy Ukraine out of is economic mess could once again bid for Saddam’s WMDs on eBay.

Or imagine the US Congress handing out $15 billion for Ukraine to smooth out its foreign debt, not to mention reducing the price of imported gas – just like Moscow did last December.

Say hello to my Iskander

The multi-billion dollar question now is what Russian President Vladimir Putin will do. One must feel tempted to detect roars of laughter in the Kremlin corridors.

For starters, Putin will decide whether or not Moscow will buy $2 billion in Ukrainian eurobonds after there’s a new government in Kiev, as Gazeta.ru reported. Kiev will get absolutely nothing from Moscow until it’s clear the new regime will play ball, in the interests of holding the country together.

‘Saint’ Yulia, by the way, was originally thrown in jail because of a gas deal that was negotiated on Moscow’s high price terms. Back to hard facts: Ukraine cannot survive without Russian gas, and the Ukrainian industry cannot survive without the Russian market. One can mix all shades of Orange, Tangerine, Campari or Tequila Sunrise revolution, and throw in the requisite IMF ‘structural adjustment’ correction – these facts are not going to change. And forget about the EU ‘buying Ukrainian’.

The Western Orangeade gang – from masters to servants – may still bet on civil war, Syria-style. Anarchy looms – provoked by the neo-fascists. It’s up to Ukrainians to reject it. A sound solution would be a referendum. Get the people to choose a confederation, a partition (there will be blood) or keeping the status quo.

Western Ukraine is plundered, disaster capitalism-style, by the Western corporate-financial mafia – while nobody gets a single EU passport. As for NATO, they get their bases, ‘annexing’ Ukraine, but also get myriads of hyper-accurate Russian Iskander missiles locked in their new abode. So much for Washington’s ‘strategic advance’.