David Cameron and Angela Merkel: Is this the end of their affair? 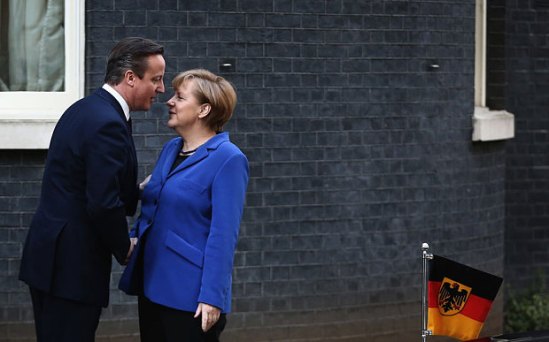 UK Prime Minister David Cameron stated that Britain would not stay in the European Union “come what may”, specifying that the immigrations issues of the country should be considered to keep it in the bloc.


MOSCOW, November 10 (Sputnik) — UK Prime Minister David Cameron vowed on Monday that Britain would not stay in the European Union “come what may”, saying Brussels needed to address immigration concerns of the British public if it wanted to keep London in the bloc.


Speaking at a meeting of the Confederation of British Industry, a UK economic pressure group, Cameron said that, “Britain’s future in Europe matters to our country.” He added, however, that it was not working properly for Britain at the moment, “and that is why we need to make changes”.

He said further that, simply saying, Britain would stay in the European Union and stick with Europe “come what may” “is not a plan and that won’t work”.

The European Union must put additional controls on migration, Cameron said. He called for reforms in the welfare system, which has been in the spotlight in the United Kingdom due to the abuse of welfare benefits by the increasing flow of migrants.

The speech was aimed at allaying the concerns of British business, which fears to lose a free market estimated at 500 million people in the event of an in-out vote on the EU membership.

Cameron’s Conservative party has adopted a firmer stance on migration ahead of the May 2015 general election. The ruling party is currently losing to the most eurosceptic party in Britain — UK Independence Party (UKIP) — that has been gaining ground both domestically and in the European Parliament recently.

Cameron has claimed he would hold a referendum on the British membership in the European Union in 2017 if he wins the May national election.

Mr Cameron believed he had wooed his German maiden and won her over to Britain’s point of view. Then came his plan to introduce EU migrant quotas. Now he must remember that Mrs Merkel is a political realist first and foremost.

There are two ways to understand the relationship between David Cameron and Angela Merkel. One way is very German. The other is classically British. The irony is that many people in Britain take the Germanic interpretation, while most in Germany see things through a British lens.

The Germanic interpretation comes from the operas of Richard Wagner’s Ring Cycle. Siegfried, the hero, is a handsome young man who does not know fear. He passes through a ring of fire to win the love of Brünnhilde, a warrior-goddess who renounces her immortal heritage to be with him. Listen to the story of modern Anglo-German relations sometimes told by Downing Street today and you’ll be left in no doubt over who is playing which role.

Rather less romantic is the vision of foreign policy articulated in 1848 by Britain’s greatest foreign secretary, Viscount Palmerston: “We have no eternal allies, and we have no perpetual enemies. Our interests are eternal and perpetual, and those interests it is our duty to follow.” If ever there was a way to understand the inscrutable Mrs Merkel’s ultra-realist approach to European diplomacy, this was it.

Mrs Merkel looms large in British politics because of reports in the German press that she has warned Mr Cameron over his attempts to curtail the European Union’s right of free movement. From that legal right springs large-scale European migration to Britain, the UK Independence Party, and Mr Cameron’s biggest political problem.

But if Mr Cameron thinks he can put quotas on EU nationals’ right to enter Britain, Mrs Merkel suggested at a Brussels summit last month, he may have to take Britain out of the EU. She also bluntly told the Prime Minister to pay an extra £1.7 billion to the EU, a demand that Mr Cameron equally bluntly said makes it harder to justify Britain’s continued membership of the union.

Are we seeing the end of the affair, the final failure of Mr Cameron’s long attempt to woo his German counterpart? It’s easy to understand why he began that attempt, since his promise to recast Britain’s relationship with the EU is surely doomed without her support.

From afar, it is easy to see Mrs Merkel as some sort of German empress or even Queen of Europe. Chancellor since 2005, she dominates German politics just as Germany dominates the modern EU. Her approval ratings are close to 80 per cent and she has co-opted almost every major German political party into her ruling grand coalition.

Yet Mrs Merkel’s dominance is deliberately unspectacular, even unambitious. Having amassed great political power, she rarely uses it; there is no grand Merkel agenda of domestic reform or diplomacy. She makes deals, not speeches, and puts compromise ahead of controversy. Like the thrifty Swabian housewife she likes to invoke, she has built up political capital but hates to spend it – especially on behalf of foreign leaders.

The curious domestic caution of such a strong leader has caught Britain by surprise in the past. Earlier this year, Mr Cameron believed – not unreasonably, since she told him so – that Mrs Merkel was backing his attempt to prevent Jean‑Claude Juncker becoming head of the European Commission.

But when German politicians and newspapers united in support of Mr Juncker – partly in reaction to Mr Cameron’s aggressively bold position — Mrs Merkel tacked with the wind, leaving Mr Cameron to a very public defeat. The message was clear – or should have been: no matter how strong their personal relations, there are limits to how far Mrs Merkel can and will go to accommodate Britain.

Yet Mr Cameron and some of those around him have a history of overestimating the influence of his personal charm over Mrs Merkel, and its political importance. Perhaps the sharpest example came in February this year, when Mrs Merkel was due in London for a state visit. Days before the event, one of Mr Cameron’s team briefed a friendly columnist that Mrs Merkel was in the bag. The Chancellor, it was said, couldn’t do enough for a prime minister she fondly regards as a sort of “naughty nephew”. She would come to London to announce her wholehearted support for his renegotiation campaign. Siegfried had won his maiden!

This romantic tale was read with both confusion and concern in Berlin, and led to a painful lesson in Palmerstonian realism. In London, Mrs Merkel offered only limited, conditional support, carefully deflating No 10’s optimism. Anyone expecting her to satisfy “all kinds of alleged or actual British wishes” was “in for a disappointment”.

As well as overstating the importance of personal chemistry, Mr Cameron’s team have sometimes shown a tin ear for German domestic politics. Almost his first promise as Conservative leader – to pull Tory MEPs out of the European People’s Party group in the European Parliament – offended the Chancellor, whose Christian Democrats are the backbone of the group. The scab was torn off the wound again this year when those Tory MEPs formed a parliamentary alliance with the Alternative for Germany (AfD), the country’s first Eurosceptic party and fierce critics of the Chancellor.

In both cases, the German irritation at Mr Cameron was the same: he was putting domestic politics and party management ahead of diplomacy. Yes, there’s more than a hint of hypocrisy in that. But dominant politicians can make rules without following them.

That tension between the domestic and the diplomatic is the origin of Mrs Merkel’s recent frostiness with Mr Cameron. She is concerned at how far he will go to placate Conservative MPs and Ukip voters.

Last month, when it first emerged that Downing Street was planning a “game-changing” speech on European immigration, alarm bells started ringing in the Foreign and Commonwealth Office. Diplomats told ministers that altering the right to free movement would not be acceptable to other European governments – especially Mrs Merkel’s, which sees Personenfreizügigkeit as a cornerstone of the EU.

But Mrs Merkel’s latest warning is not a final ultimatum; the Chancellor is, it turns out, not some operatic diva given to dramatic gestures. Rather, it was a reminder to Mr Cameron that while she prefers Britain to stay in the EU, she can and will only follow him so far down his current path.

A close reading of those latest German reports shows that they amount to saying only that Mr Cameron’s present course makes it “possible” that Britain could end up leaving. That’s a serious warning, but still a far cry from saying that exit is inevitable or desirable. If Mr Cameron and Mrs Merkel are partners in a diplomatic waltz, she has given him a gentle shove to keep him on course. She has not walked off the dance floor – yet.

Just as she did on her visit to London, Mrs Merkel is trying to lower British expectations of what is possible from a new European deal, and to gently encourage Mr Cameron not to raise the stakes too high. Ever the deal-maker, the Chancellor is not telling the Prime Minister that their negotiation is over, merely asking him to come up with a more realistic offer. That means focusing on changing EU migrants’ access to welfare to reduce the incentive to come to Britain, not banning them outright.

Is it just possible that Mrs Merkel’s warning will help Mr Cameron persuade Conservative MPs and Ukip voters to accept more realistic goals for his renegotiation? Could Mrs Merkel’s interventions actually help Britain’s Siegfried find a European dragon small enough to slay? The Prime Minister’s “Big Speech” on Europe next month will be read as closely in Berlin as at Westminster.

So the dance continues, but so too does the gulf in perception between the two sides. Mr Cameron may have strapped on his magic referendum-sword and set off on a quest to decide Britain’s European destiny, but Mrs Merkel is not a maiden to be wooed. She is the ultimate political realist, always willing to strike a deal, but never at any price. She doesn’t do quests or grand strategy. She has To Do lists, ticking off tasks as they arise, and always according to circumstance. Her support is never categorical or unqualified.

The theatrical types around Mr Cameron might ponder the conclusion of the Ring Cycle: Siegfried ends up dead and the kingdom of the gods goes up in smoke. When dealing with Mrs Merkel, realism is surely a better course than romance.