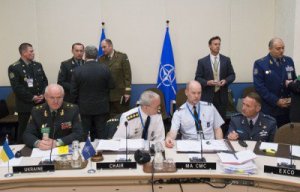 A commander of one of the Ukrainian neo-nazi battalions, the Donbass,Semyon Semyonchenko, has just returned from the US, where he met with senior senators from both parties, and received commitments of material support.

“Menendez and Corker are the two senators who have sponsored the Ukraine Freedom Support Act, a bill that will allocate money to provide assistance to Ukraine, including the supply of weapons. Radar, anti-tank weapons, drones, communications systems and many other useful things for our army. “

One of the main goals of his trip was to get training and much more from the US military. Judging by his FB post, it seems he has accomplished this.

“Yesterday I signed a contract to organize training courses for the fighters and officers of the battalion Donbass by mobile groups of instructors from the United States, held by military that are not currently in service.

They will work under the traditional training system used by the Navy Seals and Delta Force. Standards have been developed for each department (reconnaissance, special forces, security, etc.) and for each non-commissioned officer.

Particular attention will be paid to the individual training and teamwork. We will use the maximum number of practical exercises.

Another important point is the training of sergeants (NCOs) to allow it to act independently and managing a team.

The instructors will also be used to prepare the internal security forces, and that training is one of the forms of indirect assistance that Ukraine is receiving.

After his meeting with NDI and IRI he also added:

“They were very useful talks. We explained to them the situation in Ukraine as objectively as possible. We are confident that everything will go according to plan as we hoped. “