[I]f the Assad regime topples, Iran would lose its only ally in the Middle East and would be isolated. At the same time, the fall of the House of Assad could well ignite a sectarian war between the Shiites and the majority Sunnis of the region drawing in Iran, which, in the view of Israeli commanders would not be a bad thing for Israel and its Western allies. (https://wikileaks.org/clinton-emails/emailid/12171)

In 1982, Oded Yinon an Israeli journalist, formerly attached to the Israeli Foreign Ministry, published a document titled ‘A Strategy for Israel in the Nineteen Eighties.’  The strategic plan later named ‘The Yinon Plan’ suggested that for Israel to maintain its regional superiority, it must break its neighboring Arab states into smaller sectarian units engaged in endless tribal wars. The Yinon Plan implied that Arabs and Muslims killing each other was an insurance policy for Israel. 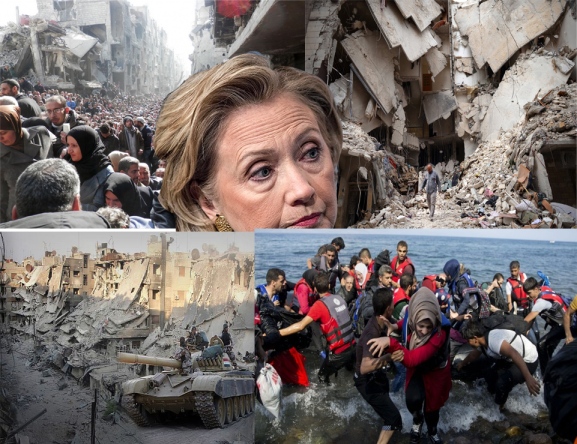 According to the Wikileaks archive of former US Secretary of State Clinton, it appears that in 2012 the Israeli intelligence service considered a potential Sunni-Shiite war in Syria a favorable development for the Jewish State and the West.

In an email sent by Sidney Blumenthal to Hilary Clinton, an Israeli source is quoted suggesting that Iran would lose “its only ally” in the Middle East if the regime of Syrian President Bashar Assad collapses. Such a development in the view of Israeli commanders “would not be a bad thing for Israel and its Western allies,” Blumenthal wrote.

It is crucial to point out that in his email to Clinton, Blumenthal also quotes an alternative view that is more reasonable and is far less enthusiastic about the escalation in Syria. “Israeli security officials believe that Prime Minister Benjamin Netanyahu is convinced that these developments (expanding Arab civil war) will leave them [Israelis] vulnerable, with only enemies on their borders.”

This email allows us to look at a vivid Israeli political debate that occurred back in 2012. The Jewish State had to decide whether to destroy the Syrian people just to weaken Iran or alternatively to destroy Iran dor the sake of destroying Iran. History suggests that a decision was taken to destroy the Syrians first.  And the outcome must be disappointing for Israel —Iran is now stronger than ever.

Shockingly, in late 2015, after three years of disastrous Syrian civil war with hundreds of thousands of fatalities and millions of displaced people, Clinton, so it seems.  still clung to the formula that Israel’s concerns with Iran should be fought on the expense of the Syrian people. In an email that US presidential candidate Hillary Clinton sent to an unknown account on 11/30/2015 Clinton wrote:

The best way to help Israel deal with Iran’s growing nuclear capability is to help the people of Syria overthrow the regime of Bashar Assad.

Israel is not the only one to blame for the Syrian shoah; Hilary Clinton shares some of the responsibility. I suggest that Ms. Clinton consider inviting at least a few Syrian refugees to settle in Clinton’s suburban home. Such a move would prove that she can be empathic, merciful and hopefully regretful.