“The real issue is who controls the wealth of this country”

BURLINGTON, Vt. — On the night of the New Hampshire primary, the high-water mark of his presidential campaign, Senator Bernie Sanders of Vermont called his rout of Hillary Clinton “nothing short of the beginning of a political revolution” and vowed to stop the “billionaire class” from buying elections.

It was barely different from the speech he gave March 15, the day he lost five of five primaries, when he asked thousands of his adoring fans: “Are you ready for a political revolution? Are you tired of a handful of billionaires running our economy?”

Nor, for that matter, was it much changed from his address to a spaghetti dinner of the Addison County Community Action Group in 1984, when he called for a “political revolution” and urged working people to take power from a “very small group of wealthy people.”

It is a political score Mr. Sanders has been singing for the last 40 years, and he does not seem ready to stop anytime soon. Regardless of the results on the scoreboard, the state on the map, the year or even the decade, Mr. Sanders has talked with clockwork consistency about an economy rigged against the working class, a campaign finance system that corrupts politicians and a corporate media that obscures the truth. 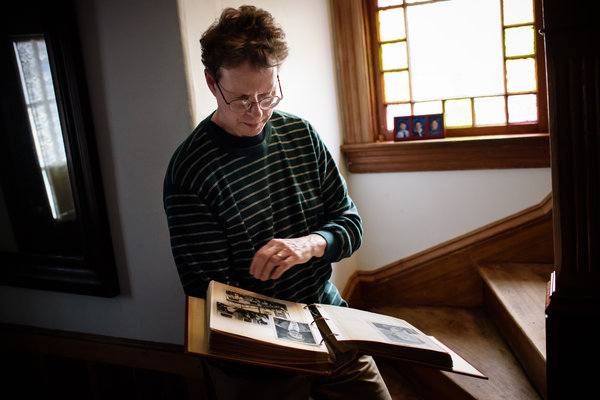 Terry Bouricius, a protégé of Mr. Sanders’s who was elected with him to the Burlington city government in 1981. Credit Jacob Hannah for The New York Times

“You could take one of his speeches from 1981, play it in the campaign this year, and no one would know, except his voice sounds a little bit younger,” said Terry Bouricius, a protégé of Mr. Sanders’s who was elected with him to the city government here that year and who has followed his career closely since.

While politicians constantly try to stay on message, Mr. Sanders is the king of message discipline. While other candidates have been lampooned for robotic redundancies or caricatured as cut-and-paste campaigners, Mr. Sanders has made oratorical consistency his calling card.

His young and loyal fans practically sing along with his timeless refrains: “the richest one-half of 1 percent” in 1971, the “richest 1 percent of the population” in 1991 and “the top one-tenth of 1 percent” in 2015. Last year, the MSNBC anchor Rachel Maddow began a segment on Mr. Sanders’s hyperconsistency by playing an audio clip of Mr. Sanders lamenting “the two-party system dominated by big money,” and asking viewers when he said it. The answer: 1989.

Mr. Sanders is not opposed to emphasizing different notes depending on the venue. In the South he talks more about civil rights, in the Rust Belt he hits trade harder, and his campaign said that in Wisconsin, which votes on April 5, he will highlight campaign finance reform.

But they are simply variations on a theme.

Matt Motyl, a political psychologist at the University of Illinois at Chicago who is studying how the candidates speak, said that while most politicians will adjust their language, if not their message, to what they believe the crowd wants to hear, Mr. Sanders does not.

“He’s peculiar in that he doesn’t really respond to that,” he said.

To his detractors, Mr. Sanders’s repetition makes him a doctrinaire ideologue, a broken record who lacks intellectual flexibility and fails to see the world any differently now than he did as a 20-something radical firebrand.

Asked if Mr. Sanders had ever been forced to change his thinking, his campaign said that he had cast a vote for the war in Afghanistan, but then called for the withdrawal of American troops when the war seemed to become a quagmire. Other than that, said Michael Briggs, his spokesman, the senator had been “remarkably consistent.”

There have been rare moments in Mr. Sanders’s career in which the two chief tenets of his socialist worldview — a critique of American militarism and exploitation of the working class — have come into conflict.

In 1983, he found himself in a tight spot when his allies in the peace movement protested at a local General Electric plant that made Gatling guns used in El Salvador. Mr. Sanders had urged the protesters to leave the unionized workers alone, saying, “Not everybody has the luxury of choosing where they are going to work.”

Mr. Bouricius, who had a front-row seat to Mr. Sanders’s anguish, said issues like war and militarism were important to him. “But they were all seen as one step down from what he saw as the fundamental issues, which was capitalism and the privilege of wealth,” he said.

That clarity has been critical to Mr. Sanders’s aura of authenticity and has attracted millions of young voters. It has also provided a stark contrast with Mrs. Clinton, who has echoed him by saying “the economy is rigged in favor of those at the top” but who still has trouble convincing voters she is trustworthy.

In the 1970s, Mr. Sanders argued his message from the political fringe, and then, starting in 1981, from his perch as the Socialist mayor of Burlington. From that office he sent news releases like one that read, “If the working people and people of moderate income do not become increasingly involved in the contemporary political struggles then the political decisions will continue to reflect the interests of the small clique of money people who presently dominate state and national politics.”

The Burlington Free Press highlighted a quotation of Mr. Sanders’s from 1971 — “the real issue is who controls the wealth of this country” — and observed that 14 years later, “He’s still singing the same tune.”

In 1988, he ran for Congress, sending a note on personal stationery inviting Vermonters to help him “make basic changes in an economic and political system in which 1% of the population owns over 50% of the wealth.”

In countless speeches and interviews and debates in Congress, the Senate and now on the presidential trail, Mr. Sanders has essentially said the same thing over and over. Mr. Bouricius worried, though, that Mr. Sanders had not done enough to actually build the political revolution he had spent 40 years calling for. “If Bernie gets hit by a bus,” Mr. Bouricius said, “a lot of this just goes away.”