As Damon Albarn makes the rounds in support of his forthcoming solo debut, Everyday Robots, he’s speaking candidly about his past drug use.

In a new interview with Q magazine (via The Independent), Albarn said that he began using heroin “at the height of Britpop” and found it be “incredibly productive”.

“I hate talking about this because of my daughter, my family. But, for me, it was incredibly creative,” Albarn explained. “A combination of [heroin] and playing really simple, beautiful, repetitive shit in Africa changed me completely as a musician. I found a sense of rhythm. I somehow managed to break out of something with my voice.”

Albarn has been clean for several years and stressed that drugs are ”cruel, cruel thing.” He continued, “[Heroin] does turn you into a very isolated person and ultimately anything that you are truly dependent on is not good.”

Albarn also addresses his drug use on Everyday Robots, specifically in the song “You and Me”. Below, watch footage of him performing the song at this month’s BBC 6 Music Festival.

Gospel sunshine streaked with London-grey melancholy, Heavy Seas Of Love is one of the more in-your-face tunes off Damon Albarn’s otherwise downbeat and reflective new album, Everyday Robots. Featuring the lovelorn sealion vocals of Albarn’s fellow West London artisan pal Brian Eno, it’s one of those songs with the strength to spirit you away and apply a balm to the cares of now. Hey, Damon’s been there, too. Maybe even Brian. Well, maybe not Brian.

Heavy Seas of Love will be available as a single track download from April 27, 2014. Its parent album, Everyday Robots, is released by Parlophone on April 28. The Heavy Seas is also the name of Albarn’s new touring band – consisting of guitarist Seye, drummer Pauli The PSM, bassist Jeff Wootton and Mike Smith on keyboards. They play the following UK dates… 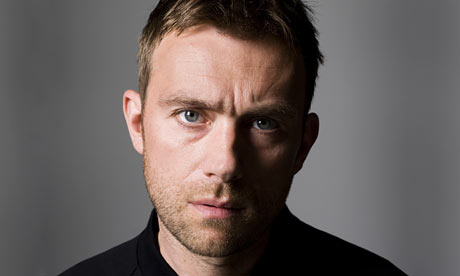 Click above to watch the promo, which was shot by Albarn himself on a tablet in locations as varied as Tokyo, London, Dallas, Utah, Colchester, North Korea, Iceland and Devon. The song is taken from Albarn’s forthcoming solo debut, ‘Everyday Robots’, which is released on April 28.

Following an appearance at SXSW in Austin, Texas next month, Albarn will play with his backing band The Heavy Seas at two special shows in London, at the Rivoli Ballroom on April 30 and The Great Hall at QMUL on May 1. He will then headline Latitude Festival on July 19.

Damon Albarn collected the Award For Innovation at the NME Awards 2014 with Austin, Texas (February 26) and said that he would “love” to collaborate with Noel Gallagher in the future. Albarn and Gallagher were given the Music Moment Of The Year prize for performing together at a Teenage Cancer Trust show in May of last year. The Blur singer also later admitted that the band had written 15 new songs for a new album, but said they won’t see the light of day for years.

Albarn also was on hand at last night’s ceremony to present Beatles legend Paul McCartney with the Songwriter’s Songwriter Award, while other big winners included Blondie, who were the recipients of this year’s Godlike Genius title, and Arctic Monkeys, who took home five gongs.