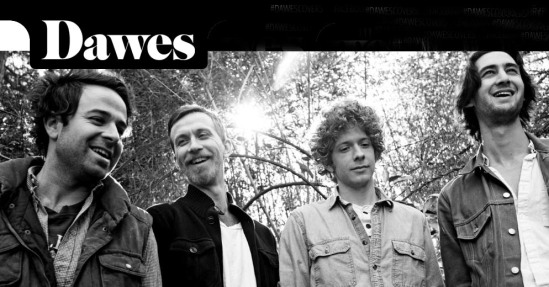 Starting life in 2009, Dawes were formed out of the remnants of the band, Simon Dawes, after main songwriter Blake Mills left the group. The remaining members continued, shortening their name to Dawes. Featuring brothers Taylor Goldsmith (lead vocals/guitar) and Griffin Goldsmith (drums), Tay Strathairn (guitar) and Wylie Gelber (bass), the band recorded their debut album, “North Hills,” with producer Jonathan Wilson. The album received positive critical acclaim, praised for its roots-rock and classic sound. They recorded the album using analog tape, helping to give a vintage authenticity to the record, which also featured contributions from Wilco multi-instrumentalist Pat Sansone.

Their second record was released in 2011, titled “Nothing Is Wrong,” which broke into the mainstream charts, peaking at number 23 on the Billboard album chart. Following the release, the band toured alongside Blitzen Trapper on a large-scale US tour. Dawes also performed at the Occupy Wall Street event in Liberty Park, New York, US, helping to support the cause through a set in collaboration with Jackson Browne.

Their third release, “Stories Don’t End,” appeared in April 2013, preceded by the two singles, “From a Window Seat” and “Just Beneath the Surface.” The album again was positively received and faired well in the Billboard charts, reaching number 36, as well as number five in the US Folk Albums chart. Their third album signalled a change in their sound after moving to producer Jacquire King, releasing the album on Red General Catalog rather than ATO Records, which was the home for Dawes’ first two albums.

Dawes – Stories Don’t End – In The Studio – The Recording Process

Dawes will play a free Record Store Day in-store performance at Music Millennium in Portland, OR at 6pm on April 18.

More tour dates to be added

In anticipation of the album’s release, the collective has already shared several album tracks: the Jim James-fronted “Nothing To It”, the Elvis Costello-led “Married To My Hack”, the Marcus Mumford-helmed “When I get My Hands On You”, and “Spanish Mary”. Today, Goldsmiths takes over as frontman on “Liberty Street”.

Despite the sheer star power of the project, this song is perhaps the most quaint and minimalist of the entire project, with Goldsmith crooning over some gentle piano and the faint whispers of a back-up chorus. Still, that light touch perfectly fits the song’s overall scope, with undertones of religious exploration and a message of personal growth/freedom. Watch its accompanying lyric video below, a slightly abstract animated piece.

Meanwhile, Dylan himself will release the entire collection of The Basement Tapes on November 4th. The Basement Tapes Complete: The Bootleg Series Vol. 11 spans a whopping 138 songs, including 30 never known to have existed. Stream it in full here.