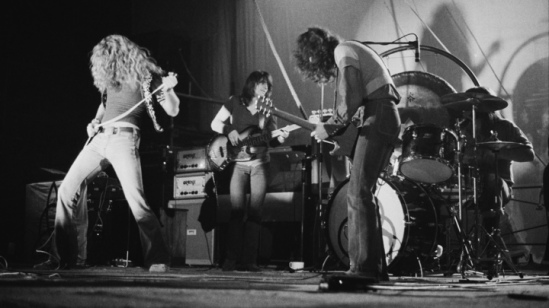 “As a song, it was actually kind of punky,” John Paul Jones says.

Later this month, Led Zeppelin will release deluxe reissues of 1971’s Led Zeppelin IV and 1973’s Houses Of The Holy. The latest installments of their year-long archival campaign, both were remastered by Zeppelin guitarist Jimmy Page and include a second disc of bonus, unreleased music.

Already we’ve heard a grittier version of Led Zeppelin IV‘s “Black Dog” and a stripped-down rendering of “The Rain Song” off Houses Of The Holy. Now, comes an alternate rendition of the Led Zeppelin IV track “Rock and Roll”. Here, a different mix of guitars evokes a somewhat softer, less dynamic tone. It doesn’t shift the song into a new direction per se, but this take certainly doesn’t wield the sweltering oomph of the final track we all know and love today.

Page spoke to Rolling Stone about the song’s undeniable exuberance, saying, “‘Rock and Roll’ has just got that cheeky energy about it. It’s a party. ‘It’s been a long time since I rock and rolled.’ It says it all, really. It’s great lyrics and it’s a great performance.”

Bassist John Paul Jones added, “As a song, it was actually kind of punky; pre-punk. It was really fast too, onstage anyway. It just got really quick, a lot of energy. It’s a lot of fun to play. The crowd loved it. We loved it.”

Both reissues are due out on October 28th. The Led Zeppelin IV deluxe edition includes unreleased versions of every song appearing on the original album, including alternate mixes of “Misty Mountain Hop”, “Four Sticks”, “The Battle Of Evermore”, and “Stairway To Heaven”. Meanwhile, the companion disc for Houses Of The Holy includes rough and working mixes for “The Ocean” and “Dancing Days”, a guitar mix backing track for “Over The Hills And Far Away”, and a version of “The Rain Song” without piano.

Answering questions submitted by fans, Jimmy Page was grilled onstage at L’Olympia Theatre, Paris, the source of the 1969 live recordings included as bonus material on the new Led Zeppelin I.

Reviewing the live tracks, Page noted that “The whole energy of the audience is just incredible, and it’s driving us on,” before adding that “it was a bit of a communion”.

The event was live-streamed from L’Olympia. But if you missed it, for whatever reason, adjust your disappointment with this taste of front row action from Page’s Q&A…

Page premiered material from the 1969 live show – including versions of Good Times Bad Times/Communication Breakdown and You Shook Me – plus bonus tracks from the Led Zeppelin II and Led Zeppelin III remasters, including rough mixes of Heartbreaker, Gallows Pole, Since I’ve Been Loving You and The Immigrant Song.