Starring Daniel Radcliffe and Dane Dehaan, KILL YOUR DARLINGS is the previously untold story of murder that brought together a young Allen Ginsberg, Jack Kerouac and William Burroughs at Columbia University in 1944, providing the spark that would lead to their Beat Revolution. This is the true story of friendship and murder that led to the birth of an entire generation. OPENS TOMORROW AT LANDMARK SUNSHINE AND THE WALTER READE THEATER AT LINCOLN CENTER!

For Kill Your Darlings star Daniel Radcliffe, making the relatively unknown story at the heart of the film was about as new of an experience as an actor can get who has already made many movies in his young life. “See, The Woman in Black was filmed in England. and If you’ve done a Harry Potter film you’re never going to work again in England without knowing someone on the crew,” Radcliffe said to Movie Fanatic and laughed.

“So doing Kill Your Darlings was a huge thing for me because it meant I would be working with nobody I knew and I would have to find out who you are on a film set again. So it felt like I was starting fresh in a way.”

Among those benefits for Radcliffe was finding unique ways of channeling his craft. “Working with John (Krokidas, director), he introduced me to techniques in ways of working that I’d never been shown before,” Radcliffe said.

So it is easy to say that Radcliffe has been on quite a journey since those doors of Hogwarts closed. “I think from doing How to Succeed in Business, the musical, and through Kill Your Darlings, that was a great period of transition for me in the way I worked.”

As shown in the Kill Your Darlings trailer, the story follows members of the Beat Generation and how those writers all interacted, including Jack Kerouac (Jack Huston), William Burroughs (Ben Foster), Lucien Carr (Dane DeHaan) and Daniel Radcliffe as Allen Ginsberg. They all met at Columbia University and forged a literary revolution that we’re still feeling today. There’s also that little murder that few people knew about when Carr was accused of killing David Kammerer (Michael C. Hall).

We wondered if Radcliffe had any inspiration from those guys and if he’d ever taken pen to paper to create poetry that mirrors his onscreen alter ego Ginsberg. “Yeah, I definitely have my fair share of some really bad poetry that I wrote when I was 17 or 18,” Radcliffe said and laughed.

When it comes to the Beat writers and their inspiration that is still felt today on a literary scale, to capture the moment in time in his mind, Radcliffe went to another place in history… one he could more relate to as a British citizen.

“In terms of the Beats, there’s something about the way they did what they did. As somebody who grew up outside the States, we don’t have that. The thing I compare them to and I used for my point of connection is the punk movement between ’75 and ’79 because that had the same kind of excited nihilism about tearing everything up and starting again,” Radcliffe said.

Radcliffe also felt a powerful duty to portraying Ginsberg as he is someone that appreciators of his work hold dear. “I think you do have a certain responsibility,” he admitted. “There’s a lot more material for you to hang onto and go, ‘He actually did that.’ You get a real insight into somebody’s character, so you’re not starting from scratch.” 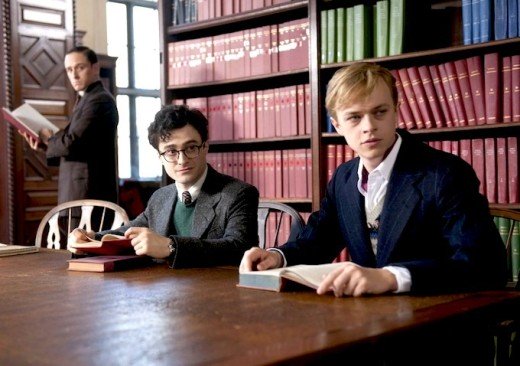 Since there is so much emotional pull between so many characters in Kill Your Darlings, Radcliffe felt that Ginsberg was the heart of the story and that too added a sense of accountability to his performance. “Allen is somebody out of the three characters we played who is probably the easiest to find empathy with or compassion,” Radcliffe said. “But there are still moments where he’s so easily manipulated by Lucien where there is a part of you that wants to shake him as a person!”

Of all the powerful scenes in Kill Your Darlings, there was one that particularly resonated with the man who was Harry Potter and even saw him grow as a thespian. “The scene where I come back and find Lucien and he tells me he’s leaving and going off with Jack. That was a scene we had done a lot because it was the audition scene. You worry about a scene that’s that intense and emotional having done it so many times,” Radcliffe said.

“The day just as we started the scene, John asked the crew to leave the room for our first rehearsal and then took me to one corner and gave me a goal. He said to me, ‘Whatever happens, just don’t let Lu leave.’ Then he said to improvise the scene without any of the lines. As someone who wasn’t used to working in that way, it should’ve been intimidating, but it wasn’t in that moment. And within two minutes I was crying, it was very real. It was an amazing exercise because I had never really had that real, intense, emotional experience during acting before. So that was very, very cool.”