Half Moon Run is a talented young band from Ottawa, Ontario and Comox, British Columbia. It was in a practice studio situated in Montreal’s Mile-End district, through the hardships of time constraints and flat-lined bank accounts, that the trio bonded and created their unique sound, fusing together the restless elements of indie, pop and folk with beautiful rhythmic harmonies, delicate guitar lines and a hint of warm electronica.

Armed with solid training and raw talent, they mix and combine their different musical backgrounds. Their complex arrangements, inspired by both classical and modern composers, are particularly striking to hear and see during their live shows. Devon Portielje’s remarkable voice is beautifully backed up by Connor Molander and Dylan Phillips. Phillips often plays drums and keys simultaneously as Molander and Portielje shuffle between guitar, keys, samplers, and percussion folky three-part harmonies hold down moody, psychedelic arrangements and electronic-infused soundscapes.

Japandroids – Over / Under – Pitchfork TV 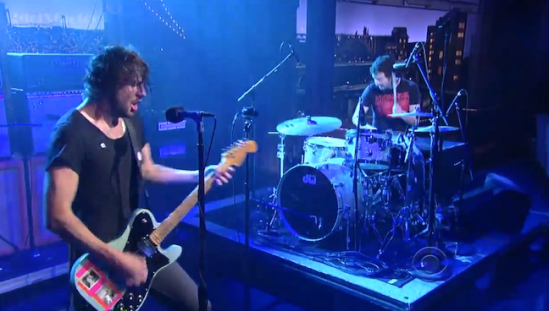 This band is awesome! Two people can produce wonderful music! Watch Brian: He’s got his guitar signal split into two different amplifiers so when he plays a chord, one amp﻿ is transmitting it clean and very bass heavy, resulting in the “bass line” you’re hearing when he hits the lower strings. The other amp is giving the usual distorted guitar sound you’re hearing play the higher chords. So he’s playing both at the same time. You can see at 2:20 hes using his middle finger to play different bass notes behind the “solo”.

Japandroids are in the middle of a seemingly never-ending tour right now. The Vancouver duo took a break to perform on “Letterman” last night, bowling through Celebration Rock’s (not “celebrity rock,” Dave) “Adrenaline Nightshift”. Watch below: