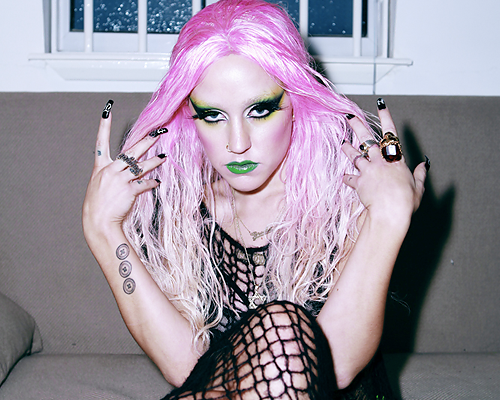 Brook Candy – Thanks but No Thanks.!

Candy’s father is the CFO of Hustler magazine and CEO of Hustler Casino, and Candy herself has been employed by Hustler as a mannequin stylist. Before becoming a pop singer, Candy worked in a strip-club called Seventh Veil for eight months. Although she has been approached by four major record labels, she has not signed a recording contract. Best known for sporting metallic bikinis and pink cornrows, Candy has been compared to Gwen Stefani, Lady Gaga, and Lil’ Kim. Candy cites transhumanism and superhero-culture as the inspiration for her metallic costumes.

Candy’s fashion has been described as a distinctive stripper-meets-Tumblr aesthetic. She often collaborates with fashion designer Seth Pratt.  Following trends in stan culture, Candy has nicknamed her fanbase #FagMob.  Considering herself primarily a stripper and rapper, Candy also hosts a blog dedicated to photography. Vice blogger Ali Carman asked Candy, in an interview, if she was offended that her internet persona was considered fake. Candy replied: “My persona is a reality to me, you know. Like I would never rap and act hood if it wasn’t actually my mentality and I wouldn’t perform in a super-sexual way if being a stripper wasn’t the way I made money.”  Candy is known for her extreme fashion style, most notably her long cornrows and metallic bikini costumes.  Her fashion sense and vocal ability has been compared to both Gwen Stefani and Nicki Minaj.  Candy forsakes the comparisons, commenting that Stefani, Minaj, and Lady Gaga draw influence from underground culture while never participating in it. Candy criticized Gaga for hiring agents to photograph attendees of an L.A. club called “Rhonda” and emulating their style.  Candy has also been recorded as accusing mainstream acts of borrowing her style, including Carmen Electra and Kesha.

Candy’s image is highly sexualized. “They told me not to make something so sexual,” Candy told New York writer Christopher Glazek, recalling a conversation Candy had with her record executives about the music video for her song “I Wanna Fuck Right Now”, whose refrain is: “I wanna fuck right now / I wanna fuck right now now”. In her song “Das Me”, Candy raps the phrase: “Slut is now a compliment” and “Candy is my name but there’s nothing sweet about me.”, epitomizing her personality and mission. Her salacious discography aims to metaphorically represent the modern, digital zeitgeist and the dystopian future Candy foresees. “I Wanna Fuck Right Now” reverses the gender-roles placed on women by hip hop music with lyrics like: “…pussy is a weapon, I’ll be shooting dudes at random.” The prologue of the song reiterates the theme by sampling the line “boy don’t try to front I know just what you are” from “Womanizer” by Britney Spears. The video for “Das Me” co-starred many of Candy’s personal friends, and the costumes were designed and made by Seth Pratt. The golden bikini sported by Candy in the video, reminiscent of the silver one worn in the “Genesis” video, was inspired by Candy’s scholarly fetish of nanotechnology and transhumanism.

MTV called Candy’s look “super hardcore”, a “breath of fresh, fearless air”, and a prayer answered by the pop goddesses. Called the “Freaky Princess”, The Guardian journalist Michael Cragg agreed with the stripper-turned-rapper’s alias, comparing her to Xena, the Warrior Princess. Musically, Candy’s work has been recognized for its twerk-able nature, springy beats, and cyberpunk.

Brandon Flowers of The Killers has hit out at the state of pop music in America, saying the majority of what he hears is “retarded”. I agree.

Brandon Flowers added: ”I start to wonder, what do adults listen to? Do they listen to what’s being played on the radio? You should listen to something that’s for you – not about giving your virginity to your boyfriend on Saturday night. It is retarded. Every song is that song. And if 40-year-olds are listening to that rubbish, they’re going to raise kids on it. It’s not even music.”

You got it Brandon!