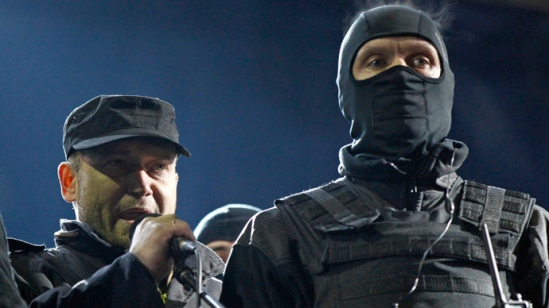 A leader of the Ukrainian radical group Pravy Sektor (Right Sector), Dmitry Yarosh, has called on Russia’s most wanted terrorist Doku Umarov to act against Russia in an address posted on Right Sector’s page in VKontakte social network.

The statement points out that “many Ukrainians with arms in the hands” supported Chechen militants in their fight against Russians and “it is time to support Ukraine now.”

The message, signed “leader of Right Sector Dmitry Yarosh” then calls on Umarov “to activate his fight” and “take a unique chance to win” over Russia.

Yarosh leads the far-right militant Right Sector group and used to be a leader of radical nationalist group Trident, which became the core of the Right Sector.

Yarosh attended the February 21st political gathering at the renamed Independence Square shortly after the signing of the deal that returned the country to the 2004 constitution. He shared the stage with virtually all of Ukraine’s prominent opposition politicians, including former superstar boxer and leader of the Democratic Alliance for Reform, Vitaliy Klitschko. In the following video, surrounded by masked units from his far-right following, he declares victory and vows to continue fighting, as the crowd cheers in a military fashion.

The radical leader has been consistently anti-Russian in his statements, calling for the destruction and division of the “Moscow Empire” and openly supporting Chechen militants and Georgian aggression. Yarosh believes Russia is Ukraine’s “eternal foe” and has said that war between the two countries is “inevitable.”

Aside from his beliefs on Russia, the Right Sector leader believes Ukraine should be “careful” with its future EU membership, as the “bureaucratic monster of Brussels” is “doing everything to bring to naught the national identity” of EU member countries.

Yarosh’s outrageous plea to terrorist Doku Umarov exhibits the “guts of the so-called new Ukrainian authorities,”Chairman of the Presidium of the Russian Congress of Peoples of the Caucasus told Itar-Tass.

“Extremists, nationalists of all stripes, flooded the peaceful republic threatening it with chaos and violence,” Aliy Totorkulov said.

Even the fact of Yarosh’s address, whose “hands are stained with blood” shows that the Ukraine’s extreme right“Maidan sponsors” and the forces supporting the instability in Caucasus come from a “single-center” of extremism, Totorkulov stressed.

“We strongly support the deployment of Russian troops to resolve the situation in Crimea as well as provide assistance to other Ukrainian regions, where the population rejects nationalism and asks [Russia] for help and protection.”

During the recent riots in Ukraine, Yarosh rejected any negotiations with the Ukrainian government, calling on his supporters to defy the truces and agreements of the government and the opposition.

The Right Sector has been referred to as the most active, the most radical and the best organized group in the Ukrainian unrest. Well-equipped masked rioters from Right Sector often used clubs, petrol bombs and firearms against the Ukrainian police. Some notorious members of the radical movement have continued to use rifles and pistols to intimidate local authorities, which they believe should be “afraid” of the people.

Although the violent acts of the group have been well-documented by media and placed on YouTube, Western powers have largely ignored its actions and persisted with describing the protests in Ukraine as “peaceful.” After meeting with Ukrainian protesters, including Right Sector members, in late January, Western representatives went as far as saying that they were “convinced that these people posed no threat.”

“The Ukrainian neo-fascist Yarosh has appealed to terrorist Umarov,” Dolgov wrote on Twitter. “Does the West place their stake on such Ukrainian ‘democrats’? Will they react to this?” 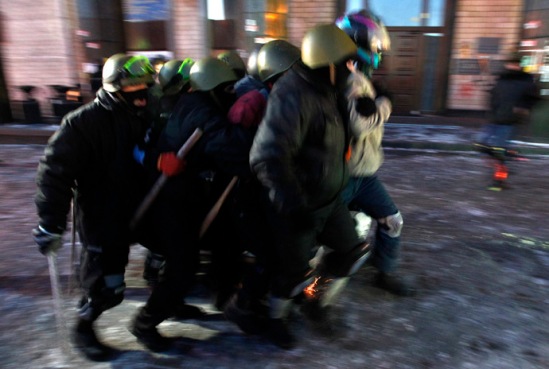 Umarov, who commanded groups of militants in both Chechen wars and organized several large terror acts, is the most wanted terrorist in Russia. Umarov has claimed responsibility for several attacks on Russian civilians, including the 2010 Moscow Metro bombings and the 2011 Domodedovo International Airport bombing, which killed dozens of people and injured hundreds.

In March 2011, Umarov was put on the UN Security Council’s Al-Qaeda and Taliban Sanctions Committee list of individuals. The US government has also announced a $5 million reward for information leading to the terrorist leader’s capture.

The self-proclaimed ‘Emir of the Caucasus Emirate’ routinely recorded video addresses, in which he incited terror attacks against Russian government forces and civilians. He last appeared alive in a video posted on the internet in summer 2013, calling to step up terrorist activities and thwart the 2014 Sochi Winter Olympics. Umarov’s long absence led rumors of his death to spread, but so far this has not been officially confirmed.

Meanwhile the social media page of the Right Sector group, where the message has been posted, was taken down as it has violated company’s policies by posting prohibited content. The VKontakte page now states that the “community has been blocked at the request of Roskomnadzor as it has been added to the register of prohibited content.”

The Right Sector social media VKontakte page had over 375,000 followers and was used for coordinating the actions of the movement’s cells across Ukraine.

After the outrageous message caught the attention of world media, a Right Sector representative has claimed that the movement has nothing to do with the posting and that one of their administrator’s accounts was “hacked.” 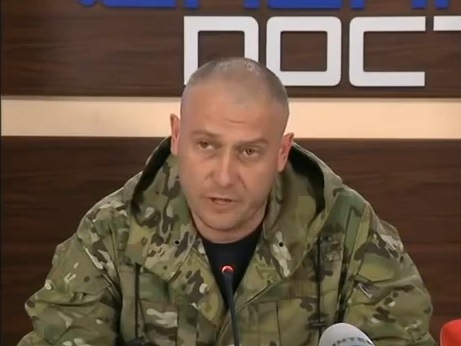 On April 22, Spiegel Online published an interview with Dmytro Yarosh, leader of the Ukrainian fascist paramilitary organisation Right Sector. This interview confirms that the fascists not only played a decisive role in the overthrow of President Viktor Yanukovych on 22 February, but also play a significant role in the current transitional government headed by Arseniy Yatsenyuk.

Yarosh explained that the armed wing of his organisation had not been disbanded, but legalised. “Our battalions are part of the new territorial defence. We have close contact with the intelligence services, and the general staff. We actually have good relations with everyone, apart from the police,” he told Spiegel Online.

Yarosh is closely connected to Andriy Parubiy, who commanded the self-defence forces during the protests on Independence Square (the Maidan). Parubiy was the co-founder of the fascist Ukrainian Social National Party, the predecessor of Svoboda. He is now a leading member of the Fatherland Party of Prime Minister Yatsenyuk, and heads Ukraine’s security and defence council. Yarosh was originally supposed to have been his deputy, but rejected the offer in order to maintain his freedom to manoeuvre against the government.

In the interview, he made clear that Right Sector does not accept the authority of the current government, nor would it accept a future elected government. “Our revolution will only be completed when we have totally renewed the state,” he stated.

His goals are clearly of a fascist character. His choice of words was similar to those of the Nazis, whose terror regime he described as a “government of national revolution.”

Asked by Spiegel Online about his motives, Yarosh answered, “I am a Ukrainian nationalist. My goal is a strong state.” He described liberalism as “a form of totalitarianism.” On the EU, he criticised its alleged “anti-Christian orientation.”

“We oppose the destruction of the traditional family, and are against same-sex marriage.” By contrast he supported the EU’s social and economic policies, calling for tax cuts to support the middle classes and foreign investment.

In his militarist work “Nation and Revolution,” Yarosh expressed himself even more explicitly, as Spiegel Online pointed out. In it, he openly opposes parliamentary democracy and advocated an ethnically-based nationalism. He intends to spread “the nationalist ideology throughout the entire territory of our state,” “de-russify” eastern Ukraine, and ensure that the native people have the leading role in the state.

Yarosh no longer appears in a military uniform. He is a candidate for the upcoming presidential election and now wears a suit and tie. In his interview with Spiegel Online, he sought to downplay his anti-Semitic beliefs, which could prove embarrassing for the Western supporters of the new regime in Kiev.

The interview with Yarosh—and the fact that he was provided a political platform by Spiegel Online—shows the thoroughly reactionary nature of the forces Western powers relied upon to force regime change in Kiev and provoke a confrontation with Russia. In February, the armed provocateurs of Right Sector played a key role in escalating the conflict with security forces, leading to the loss of hundreds of lives and the overthrow of the elected president, Viktor Yanukovych.

Meanwhile, there are reports indicating that western cooperation with Right Sector goes back some time. According to a report in the Polish weekly Nie (“No”), published by 80-year-old journalist Jerzy Urban, the Polish Foreign Minister Radoslav Sikorski invited 86 members of Right Sector to an intensive, four-week training course at the Police Training Centre Legionowo near Warsaw last September.

The fascists were trained in crowd management, person recognition, combat tactics, command skills, behaviour in crisis situations, protection against gases used by police, erecting barricades, and especially shooting, including the handling of sniper rifles. The training was officially described as “student exchange.”

The visit took place a full two months before the Ukrainian President Viktor Yanukovych refused to sign an Association Agreement with the EU on 21 November—the event that triggered the Maidan protests. If the report in Nie is true, it shows that the events leading up to the regime change in Kiev were a carefully planned provocation.

The Polish Foreign Minister Sikorski has close links to ruling circles of the USA. He is married to the right-wing American journalist Anne Applebaum and was director of the Atlantic Initiative at the American Enterprise Institute in Washington, starting in 2002.

On February 21, Sikorski together with German Foreign Minister Frank-Walter Steinmeier and the French Foreign Minister Laurent Fabius, negotiated the agreement between President Yanukovych and the Ukrainian opposition, which was then sabotaged within the space of a few hours by the Right Sector and other armed groups. If Sikorski maintained close links to the Right Sector then he must have known of or possibly planned the provocation with the fascists.