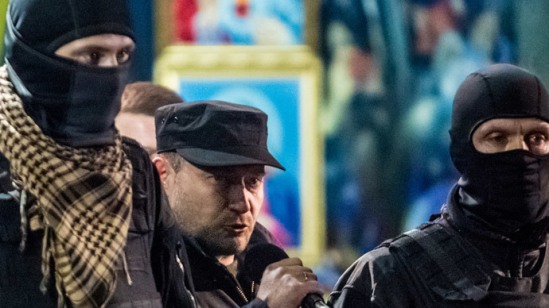 The leader of the Ukrainian radical group, Pravy Sektor (Right Sector), Dmitry Yarosh, has been put on an international wanted list and charged with inciting terrorism, after asking Doku Umarov to attack Russia.

“The investigators believe that Yarosh has been publicly calling upon anti-Russian forces for extreme actions and terror on the territory of Russia,” said Vladimir Markin, the spokesman for Russia’s Investigative Committee.

In the near future, Russian investigators are going to demand Yarosh’s arrest, he added.

Yarosh has not yet been put on the Interpol official database because it is up to the secretary-general of the organization to inform member states about putting citizens on an international wanted list.

Earlier, on Sunday Yarosh called on Russia’s most wanted terrorist, Doku Umarov, to act against Russia in an address posted on the Right Sector’s page in the Russian VKontakte social network.

The statement said that “many Ukrainians with arms in their hands” supported Chechen militants in their fight against Russians and “it is time to support Ukraine now.” The message, signed “leader of Right Sector Dmitry Yarosh” called on Umarov “to activate his fight” and “take a unique opportunity to win” over Russia.

Umarov has claimed responsibility for many attacks on Russian civilians, including the 2010 Moscow Metro bombings and the 2011 Domodedovo International Airport bombing, which killed dozens of people and injured hundreds.

After Yarosh’s public appeal to Umarov, Russia’s investigative committee on Monday launched a criminal case against him. If indicted, Yarosh may face up to 7 years in prison in Russia.

However, Ukraine will not hand over the leader of far-right group Right Sector if Russia makes such a request because that would violate Ukrainian laws, the Prosecutor General’s Office said in a statement.

Yarosh, who leads the far-right militant Right Sector group, has always been anti-Russian in his statements, calling for the destruction and division of the “Moscow Empire” and openly supporting Chechen militants and Georgian aggression. Yarosh believes that Russia is Ukraine’s “eternal foe” and that a war between the two countries is “inevitable.”

The Right Sector movement, a combination of several far-right groups, was formed in November 2013 soon after the anti-government protests in Ukraine began. Members of the radical movement were very active in the violent events which led to the ouster of President Viktor Yanukovich. After the February-21 agreement between Yanukovich and opposition leaders was signed, they declared they did not recognize it and would continue the armed struggle.

The group has been referred to as the most active, the most radical and the best organized group in the Ukrainian unrest. Many of its violent acts have been well-documented by media and placed on YouTube. Well-equipped masked rioters from Right Sector used clubs, petrol bombs and firearms against the Ukrainian police. Some members of the movement continued to use rifles and pistols to intimidate local authorities after the coup. 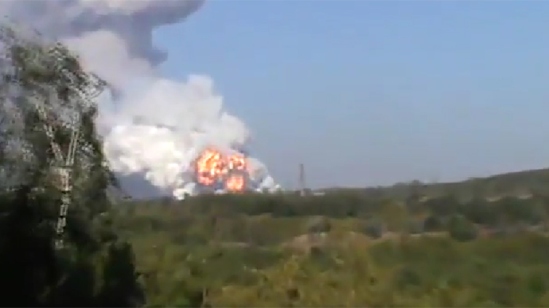 A powerful explosion occurred at a military plant in the rebel-held Ukrainian city of Donetsk after a shell hit it. A fire is now ravaging the damaged facility.

The plant was used for producing explosives and ammunition as well as for dismantling unexploded munitions collected on the battlefields. On Saturday morning, residents of the war-torn city heard a powerful blast, which was followed by a huge cloud of white smoke rising into the sky.

A neighborhood official told Ukrainian 112 television that a shell hit the plant.

“There was a direct hit at the No 47 industrial explosives shop, where some explosives were present. It detonated and caused another explosion. Luckily it didn’t hit the main storage facility where we have some 2.5 tons of explosives,” said Ivan Prikhod’ko, deputy chair of the local community council.

He added that while the incident caused considerable damage, nobody was hurt. The plant itself was not working at the time, so no one was there. Also, it was built far from any residential areas specifically for safety purposes.

As the fire continued, smaller explosions could be heard, presumably from shells detonating in the fire, RIA Novosti reported.

There is no verified report about what kind of weapon hit the plant. But there are rumors of it being targeted by a Tochka-U tactical missile launched by Kiev’s troops.

“According to our information, three Tochka-U missiles were fired and there you have it,” a militia member who identified himself as codename ‘Scorpio’ told RT. He added that the area around the plant was considered dangerous lately because both the rebels and their opponents could shell it.

The incident mars Friday’s signing of an extended ceasefire deal between Kiev and rebel forces, which hopes to put an end to hostilities in eastern Ukraine. The deal includes pulling back all heavy weapons from cities and frontlines.

The blast happened just as a Russian humanitarian aid convoy was unloading elsewhere in the city. Some 200 trucks carrying 2,000 tons of aid crossed the border earlier on Saturday.