One week ago today, Dave Grohl, Trent Reznor, Josh Homme, and Fleetwood Mac’s Lindsey Buckingham capped off the 2014 Grammy Awards with a blitzing performance…. that was cut short in favor of a Delta Airlines commercial. But now, fans can watch the performance as it was originally intended thanks to an uncut rehearsal video (via Antiquiet). Watch the once-in-a-lifetime rock ‘n’ roll super group tear through Nine Inch Nails’ “Copy of A” and Queens of the Stone Age’s “My God Is the Sun” below.

Nine Inch Nails frontman Trent Reznor has received an apology from the producer of the Grammy Awards.

Reznor’s band joined Queens Of The Stone Age, Dave Grohl and Fleetwood Mac’s Lindsey Buckingham for the closing slot at the event at the Staples Centre in Los Angeles on Sunday night (January 26), but their performance was cut short by the closing credits and a commercial break.

Reznor took to Twitter to blast the organizers, writing “Music’s biggest night… to be disrespected. A heartfelt FUCK YOU guys.”

However, in a new interview with The Hollywood Reporter, executive producer NAME says: “I’m sorry he was upset. I was really thrilled that we were finally getting him on the Grammys. The final jam started with Arcade Fire a few years ago, and LL Cool J last year. I wanted to end on a high, an up note. I did tell them we’d take it as long as we could. The number was about five, six minutes long, and we got to within a minute twenty of the end. We got as close as we could possibly get.”

Reznor has form in airing his grievances over Twitter. Ahead of their performance at Reading Festival last year, he complained that the festival promoter and headliners Biffy Clyro had “fucked us on production”.

The Big question at the Grammys: Can someone tell me who the fuck Daft Punk is?

As you may recall, following Arcade Fire’s earth-shattering Album of the Year win at the 2012 Grammys, a Tumblr page was launched compiling various tweets asking, “Who is Arcade Fire?”. Though music writers and bloggers chuckled along, it wasn’t that outrageous of a question. At the time, Arcade Fire was still a relatively unknown band to mainstream America, a quirky group of Canadians signed to an independent record label and who dressed in funny outfits.

Surely, Daft Punk wouldn’t suffer from similar obscurity. After all, Thomas Bangalter and Guy-Manuel de Homem-Christo have been heavyweights in music for two decades, with more than a few chart-topping songs to their name. They’ve even performed at the Grammys before, teaming with Kanye West for “Stronger”. So, yea, surely no one would tweet, “Who is Daft Punk?”. 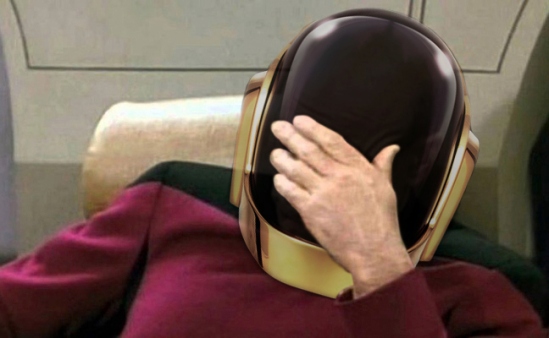 Music fans weren’t the only ones disappointed by CBS pulling the plug early on the Grammys finale last night. About 45 minutes after the broadcast, Nine Inch Nails frontman Trent Reznor unleashed an invective on Twitter at the awards show’s organizers, playing with its tagline. “Music’s biggest night. . . to be disrespected. A heartfelt FUCK YOU guys,” he wrote.

“Music’s biggest night. . . to be disrespected,” NIN leader wrote after show-ending performance was cut off.

Although Nine Inch Nails, Queens of the Stone Age and Dave Grohl were all nominated for Grammys this year, only the drummer took home a trophy what Jay Z affectionately called a “gold sippy cup.” The Foo Fighters frontman Grammys for Best Rock Song – for “Cut Me Some Slack,” his collaboration with Paul McCartney and former members of Nirvana – and for Best Compilation Soundtrack for Visual Media for Sound City: Real to Reel, an album that featured him playing with Reznor and Queens’ Josh Homme on the track “Mantra.”

Queens of the Stone Age had been nominated in three categories. And finally, likely adding to Reznor’s ire, Nine Inch Nails’ 2013 LP Hesitation Marks had been nominated for Best Alternative Music Album. It lost to Vampire Weekend, whose Modern Vampires of the City earned them the trophy.

Trent Reznor Blasts Grammys With ‘A Heartfelt Fuck You’ Tweet.

What better way to close out the 2014 Grammys then with a super group for the ages. Dave Grohl, Trent Reznor, Josh Homme, and Fleetwood Mac’s Lindsey Buckingham joined forces for an epic, once-in-a-life performance of rock and roll excellence. Homme and Buckingham manned guitar and Grohl did his thing on drums as Reznor got things start with a rendition of Nine Inch Nails’ “Copy of A”. Homme then took over lead for Queens of the Stone Age’s “My God Is the Sun”, though was tragically cut short in favor of a Delta commercial. Bet that would never have happened to Taylor Swift. #NoRespect. Catch the replay below.

The awards show had been running about 15 minutes late by the time Nine Inch Nails took the stage with Queens of the Stone Age, Fleetwood Mac’s Lindsey Buckingham and Dave Grohl. The supergroup was able to play two songs – NIN’s “Copy of A” and most of Queens of the Stone Age’s “My God Is the Sun” – before the TV network ran ads for its programming and for an airline sponsor, all with the music going on in the background. Considering the group members had all played together in various configurations, the rest of their set remained a mystery to TV viewers.

Get Me Out Of Here Please!

The Grammys again announced their nominations with some extra flash and fanfare this year, flipping the old morning podium announcement into another prime time concert special live from the Staples Center in L.A. LL Cool J, who hosted last year’s Grammy broadcast, was back to MC this show as he will for the ceremony next month. Performers included inescapable 2013 stars and starlets such as Lorde, Macklemore & Ryan Lewis, Robin Thicke, Katy Perry, and Taylor Swift, all of whom received nominations in major categories – OF COURSE!. Keith Urban and Miguel (WHOEVER THEY ARE!) teamed for a typically suave cover of Bill Withers’ “Ain’t No Sunshine,” too, which was truly pleasant. You can watch some of these performances at the bottom of this post. In the end, Jay Z was nominated for nine Grammys; Kendrick Lamar, Justin Timberlake, and Pharrell were each nominated for seven; and Daft Punk and Drake were nominated for five. Here’s how the major laughable categories stand (Brooklyn rock band The National, Nine Inch Nails, Tame Impala, and Vampire Weekend. are now called “alternative music”!)

Who are the big winners and losers here? You have to see through the cold, hard numbers a bit for perspective – OH, REALLY?

Technically, Jay Z leads the field with nine nominations, but he was shut out of all the major categories. His collaborator and tourmate Justin Timberlake suffered the same fate; JT earned seven nods but none for Album, Record, or Song Of The Year. That has to register as a disappointment for those two titans of (the entertainment) industry. Drake’s five nominations look a lot less impressive for the same reason: They’re all in rap-specific categories except for his tangential involvement with Kendrick Lamar’s Album Of The Year-nominated good kid, m.A.A.d. city.

Lorde’s failure to garner a Best New Artist nod scans as a snub, especially when NARAS is returning to that confusing Grammy practice doling out nods to well-established acts (James Blake) and artists who’ve already won Grammys (Ed Sheeran). Only two nods for commercial giants Imagine Dragons has to sting a little bit, and you have to think Taylor Swift was hoping for nod in the Song or Record Of The Year categories to go along with her Album Of The Year nod for Red. And Kanye West, who earlier this year noted to The New York Times “I haven’t won [a Grammy] against a white person,” can’t be happy with only to be relegated to the rap categories with his two nominations.

Relative newcomers Macklemore & Ryan Lewis and Kendrick Lamar fared far better in the big picture; both rap acts garnered seven nominations each, including Album Of The Year and Best New Artist nods. Macklemore & Lewis also nabbed a Song Of The Year nomination for “Same Love” feat. Mary Lambert, making the Seattle hip-hop duo the most prominently featured artist in the top-tier categories. Even with arguably the three biggest names in rap (Jay Z, Kanye, and Drake) missing out on the major categories, it’s looking like an up year for the genre. This seems like the most likely chance for a rapper to win Album Of The Year since OutKast won in 2004 for Speakerboxxx/The Love Below. (Before OutKast, The Miseducation Of Lauryn Hill in 1999 was the only hip-hop album to take home top honors.) Hip-hop seems especially well represented compared to all-but-invisible showings from EDM and Mumford & Sons-style folk-rock.

Daft Punk’s five nominations are nothing to shrug at either, especially considering the robots made it into the two top categories, Album and Record Of The Year. Their “Get Lucky” cohort Pharrell Williams wrapped up his dominant year with seven nominations too — including one for Producer Of The Year, Non-Classical — although thanks to his involvement with Robin Thicke’s “Blurred Lines” he’s competing against himself in the Record Of The Year and Best Pop Duo/Group Performance categories. James Blake continues his shocking award tour with that Best New Artist nod. And if you’re Sara Bareilles, you have to be stoked to be in the Album Of The Year conversation at all.

Here are some performances from The GRAMMY Nominations Concert Live. Enjoy if you can…