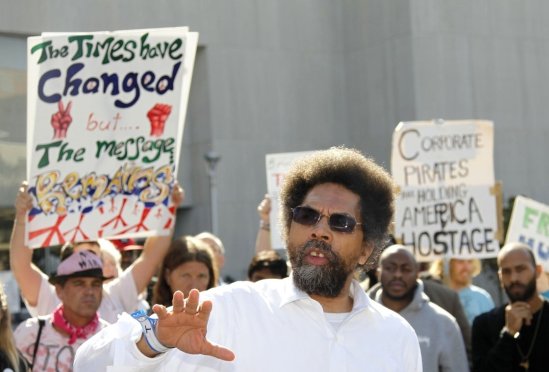 Acclaimed professor and activist Dr. Cornel West was arrested with 18 others on the steps of the Supreme Court building in Washington DC on Saturday during a local demonstration with the growing Occupy Wall Street movement.

Dr. West says that he was in Washington earlier in the day to witness President Barak Obama’s dedication of the Martin Luther King Jr. Memorial, only to join protesters hours later at Freedom Plaza on Pennsylvania Avenue. It is there that activists have been congregating for over a week down as part of the October 2011 Stop the Machine protest that hopes to draw attention to the ongoing war in Afghanistan — which earlier this month reached the 10-year mark, making it the longest-going American war ever.

Once at Freedom Plaza, West and dozens others marched through Washington to the Supreme Court building. A spokesperson for the high court confirmed that West was one of 19 people arrested for refusing to the leave the grounds. Video shows that protesters remained peaceful as they sat on the steps of the courthouse awaiting arrest.

Speaking from the steps of the building, West told a crowd of protesters and reporters, “We want to bear witness today that we know the relation between corporate greed and what goes on too often in the Supreme Court decision. We want to send a lesson to ourselves, to our loved ones, our families, our communities, our nation and the world that out of deep love for working and poor people that we are willing to put whatever it takes, even if we get arrested today, and say, we will not allow this day of Martin Luther King Jr’s memorial to go without somebody going to jail.”

Before his arrest, Dr. West told a reporter with NoCureForThat.org that the ongoing movement, approaching a full month of protests, has already reached historical status. “The question is where it will continue and what form it will take. We just don’t know at this point.”

Dr West added that “Martin King would be here right with us, willing to throw down out of deep love.”

“We love poor people, we love working people and we want Martin Luther King Jr to smile from the grave that we haven’t forgot him,” said Dr West.

In an interview earlier this year, Dr West accused President Obama as being “a black mascot of Wall Street oligarchs and a black puppet of corporate plutocrats.”

Cornel West will be arraigned at the Supreme Court this afternoon.