“Geniuses are not omnipotent. They are just very skilled at employing the creativity toolbox”: ‘Genius Unmasked’ by Roberta Ness.

How would you like to have Albert Einstein rise from the dead and spend an afternoon telling you how he thinks? How about getting a few tips for your creative muse from Edison? Skeptical huh? None of us have ever heard a genius explain how he or she reasons and even if they could, the rest of us are simply not that omnipotent. But my book Genius Unmasked reveals a surprising truth about genius. By taking a whirlwind journey through the lives and minds of over a dozen brilliant scientists such as Darwin, Einstein, Edison, Montessori, and Pasteur, Genius Unmasked demonstrates that each used a systematic thinking method. It was a method common to them all. The insights achieved by the greatest minds of the past century were not mystical or unknowable. They stemmed from identifiable tools that you, too, can access.

Consider the accomplishments of Charles Darwin, father of the theory of evolution by means of natural selection. Darwin’s theory departs so radically from religious teachings and it is so counterintuitive that it continues, 180 years later, to generate controversy. In a recent Gallop poll, fewer than 20 percent of Americans surveyed subscribe to the tenet that human beings developed over millions of years from other life forms.

What Darwin posited is that reproduction is Mother Nature’s way of dealing random cards from a deck of diverse traits that a species might inherit. If a card is dealt that enhances the holder’s hardiness in a given environment then that card gets dealt again in the next round. On the other hand, if the card reduces hardiness, it is discarded. Eventually, the hardiness card becomes dominant in the game. Thus, Darwin’s theory suggested that Mother Nature does not care what cards get dealt; rather, the environment determines which traits stay in the game and which get multiplied over generations.

How did Darwin shatter the prevailing belief of his time that God creates all creatures to perfection? How did he replace this frame with the cynical view that nature is nothing more than random anarchy? Mind you, Darwin was no conventional thinker. Even as a youth he rejected convention, dropping out of the University of Edinburgh where his father envisioned he would gain the credentials to become a physician like himself. Instead, Darwin spent his privileged formative years beetle collecting and classifying plants. Just as his father was about to ship him off to become an Anglican minister, a letter from a former botany professor allowed him to ship off in radically different direction that would change his life.

In 1831 Darwin became the gentleman companion and naturalist to Captain Robert FitzRoy on a round-the-world voyage of the HMS Beagle. The Beagle adventure gave Darwin the opportunity to practice his first tool of creative genius: observation. With the greatest of patience, persistence, and discipline, Darwin discovered and categorized crate loads full of flora and fauna representing the rich diversity of South America and the South Seas. His care in noting every feature of each specimen became the basis for his transformational insight.

Humans are surrounded by so much sensory input that we become complacent to our surroundings. To prove this to yourself, just consider what you actually noticed while traveling to work or school this morning — with much on our minds, the answer for most of us is “not much.” Innovation starts with training yourself to be keenly aware of each moment.

One famed constituent of Darwin’s treasure trove of specimens was an array of birds from the Galapagos Islands off the coast of Ecuador. Thinking they were a mixture of orioles, grosbeaks, and wrens, he was amazed when, upon his return to England, a consulting ornithologist, John Gould, identified all of them as finches. Here was another of Darwin’s thinking tools: the power of groups. Alone, it is not clear that Darwin would have achieved a breakthrough.

The democratization of ideas and the power of pluralism make the World Wide Web the most potent tool ever devised for finding transformational solutions to mankind’s greatest problems. The lowly man-on-the-street suddenly becomes the leader of a political uprising through social media. The solo researcher harnesses the capabilities of hundreds of colleagues to disentangle the secrets of the genome. Crowdsourcing author Jeff Howe explains that a group with some understanding of a problem’s complexities and enough latitude to express individuality will access “local knowledge” — a diversity of knowledge and experience that can find breakthrough solutions not available to the solo problem solver or even a group of experts. He describes an experiment in which two artificial groups competed to solve a task. One, a virtual “Mensa group” consisted of the best and brightest content experts, each possessing a similar type of training and smarts. Against them was a “Brown socks group” without the same expert brain power but with a high degree of able-mindedness and a high degree of diversity. Surprisingly, the Brown socks beat the Mensas every time. Today, with the Web at your fingertips and an important problem to share you can assemble an orchestra of volunteers to expand your creative capabilities.

Analogy was a further device in Darwin’s toolbox. Appreciating that species could be diverse left him wondering, to no effect, about the forces that generated such diversity. At just this crossroads, a stroke of luck led him to read the work by the demographer Malthus: Essay on the Principles of Population. Malthus said that the human population increases geometrically. From two parents come four offspring; those four produce eight of their own; eight in the next generation produces sixteen and so on. However, food production increases arithmetically: with luck and good farming practices a farmer producing two bushels of corn might increase his yield to three in the next generation, and four in the following generation. Before you know it, Malthus claimed, hungry Englishmen would be roaming a country side full of famine, pestilence, and war. Darwin realized that Malthus had hit upon the missing piece of his own theory — the explanation for the perpetuation of diversity. The environment determined what traits were adaptive and which not. Just as Malthus believed that farming constrains population, Darwin posited that environmental conditions selected those traits that were most likely to be transmitted to the next generation. And voila, Darwin had invented survival of the fittest.

As eluded to previously, Darwin’s most radical tool was frame shifting. He abandoned the prevailing belief, or frame, that God is the caring master craftsman that perfectly fashions all living things. To break this frame, Darwin reversed the master craftsman assumption, speculating that Mother Nature cares nothing for the random variation that she throws into the competition for survival.

Shattering widely-held assumptions — breaking frames — is not easy and it takes practice, but it is the key to innovating. We assume that obesity is a problem of personal choice but maybe that is wrong. When human genetic susceptibility is combined with an obesogenic food environment self-control may be close to impossible. If so, the assumption of personal responsibility is not fully valid. A new frame, that the public must advocate for policies to force food manufacturers to market healthier foods, may be needed.

Darwin was gifted, but not as a wizard — as a user of tools. These included observation, the power of groups, analogy, frame shifting, and reversal. Genius Unmasked describes these and other tools plied by eminent scientists in the fields of physics, psychology, education, engineering, chemistry, and biology. Along the way, we meet common household names and we also encounter less well-known but equally fascinating characters. We get to dissect the minds of Russell Marker and John Rock, fathers of the oral contraceptive Pill, Ancel Keys, originator of the Mediterranean diet, and Paul Baran, mastermind behind the Internet, among others.

Geniuses are not omnipotent. They are simply very skilled at employing the contents of the creative toolbox. By understanding the methods employed by eminent innovators, you, too, can learn to apply the tools of genius. Learning is useful mimicry — the stories of geniuses can help you find your own capacity for ingenuity. 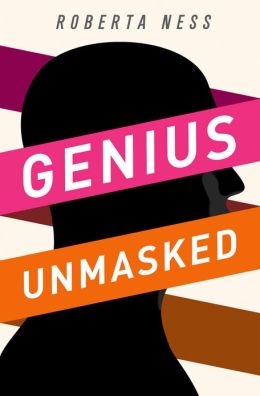 Genius Unmasked reveals the true nature of genius, taking the reader on a journey through the lives and minds of more than a dozen brilliant scientists, ranging from Darwin, Einstein, Edison, and Pasteur, to such lesser known but important innovators as Maria Montessori. Their stories are truly compelling, and at time inspiring, but, more important, Roberta Ness uses these stories to highlight a cognitive tool box that anyone can employ. Ness, an authority on innovation, outlines eleven basic strategies–including finding the right question, observation, analogy, changing point of view, dissection, reorganization, the power of groups, and frame shifting. Beginning with Charles Darwin, who left behind a voluminous trail of writing that preserved his thinking process, Ness illuminates his use of all eleven tools. Indeed, for each genius, she combines a fascinating narrative of their creative work with an astute analysis of how they used particular tools to achieve their breakthroughs. We see how Ancel Keys, the father of the Mediterranean diet, used the “power of groups”–enlisting a team of statisticians, nutritionists, physiologists, and physicians–to track the health benefits of exercise and diet. How Paul Baran conceived packet switching–the idea that made the internet possible–through analogy with the neurological networks of the brain. And how Maria Montessori overturned the conventional frame of thinking about the role of children in education.

Genius Unmasked shows how the most creative minds in science used tools that can help us improve our creative abilities. Geniuses are not omnipotent. They are just very skilled at employing the creativity toolbox highlighted in this book.

Roberta B. Ness, M.D., M.P.H., a recognized expert in women’s health research, became dean of The University of Texas School of Public Health November 1, 2008. She is the School’s fourth dean since it was established in 1969. Dr. Ness also holds the M. David Low Chair in Public Health, is a professor in the Division of Epidemiology and Disease Control, and Vice President for Innovation at The University of Texas Health Science Center at Houston. She is a member of the Institute of Medicine of the National Academies of Science, a fellow of the American College of Physicians and past-President of the American College of Epidemiology. She is President-Elect of the American Epidemiological Society.