The following text and photos were sent to Global Research. They indicate a carefully planned agenda to incinerate people inside the Trade Unions building.

The images as well as reports suggest that the death toll was significantly higher than that published by the media.

The Western media has been involved in acts of coverup and distortion, describing the self-proclaimed Neo-Nazi Brown shirts as nationalists and “honest patriots”. Western governments have casually blamed the atrocities in Odessa on “pro-Russian paramilitaries”.

The Neo-Nazi mobs in Odessa bear the hallmarks of  US sponsored terrorism (e.g Syria) trained to commit atrocities against civilians.  America’s Neo-Nazi Government in Kiev is a reality. Confirmed by Germany’s Bild: “Dozens of specialists from the US Central Intelligence Agency and Federal Bureau of Investigation are advising the Ukrainian government”

A Great tragedy happened to the port city of Odessa at Friday, May 2nd, 2014.

Supporters of federalism were chased to the Trade Unions House by Right Sector mob. The building caught fire soon afterwards, which resulted (by official reports) in 42 deaths.

It’s clear that the number of casualties in the Trade Unions House is far greater. Provocateurs captivated people into the building where it was possible to kill them with impunity, with great relish, and without witnesses. Fire inside the building was directed in order to hide mass murdering of Ukrainian citizens.

Firstly, the tents on the square were set on fire which resulted in appearance of large open fire areas close to the building. People were captivated to hide behind massive doors of the Trade Unions House. Federalism supporters had no Molotov’s cocktails prepared in advance. From where has fire inside the building appeared?

People behind the doors of the ground floor have been attacked by the Right Sector thugs who got in there long before the execution has begun. Those people were burned to the bones, first at main entrance…

…Then at rest of them.

Firefighters only appeared when massive entrance doors were burned through. 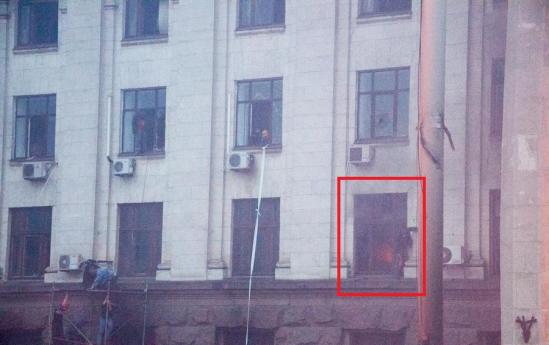 Only in a single room in a five-storey building with ceilings over 3 meters high had fire visible from outside.

Who could get onto the roof of the administrative building of nationwide significance? Perhaps those who in advance got the keys to locked steel gratings protecting the roof doors.

These thugs must be found. They could tell a lot about when the murdering plan implementation has started, and how in advance they brought supplies for Molotov’s cocktails to the Trade Unions House.

On the picture below stunt [above pic] clowns play a role of federalism supporters. Typical Hollywood (USA/Israel)-style false flag action.

Charred bodies on the ground floor, near the entrance doors

Why charred bodies appeared on higher floors where there was no open fire? 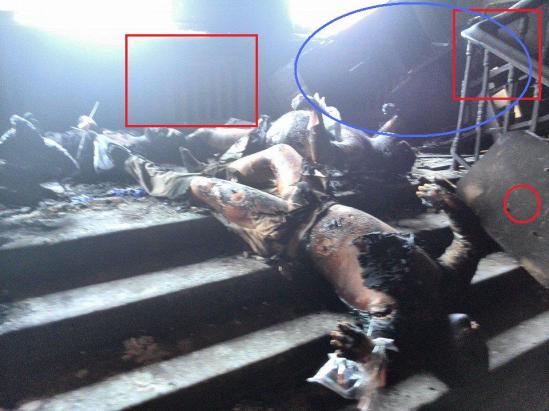 The same bodies from other viewpoint:
– Wooden battery panel, wooden railings on the stairs and chipboard sheet don’t look burnt;
– Blue oval points to the barricade made of tables, chairs and cabinets. It hadn’t even touched by fire, unlike the charred bodies lying nearby;
– From where has the barricade appeared? It was built by the Right Sector thugs in order to lock people trying to save themselves on the above floors.

Female corpse was dragged across the floor space from the real place of her death. Who and why did it?

This man was shot in the head. Judging from clearly visible blood puddle, the murderer fired at point-blank so the bullet passed through the skull.

Have you noticed already that some dead people had burnt heads and shoulders only? That clothing under chest is not affected by fire? Somebody poured flammable stuff onto upper body of those people and set them ablaze. Could sunglasses stay on the face when a man tries to shake the napalm off his head? Notice that hands and wrists of those people burned to the bones, too.

On this and previous pictures, a strange “whitewash” can be seen on the floor. That is the powder from extinguishers used by the punishers after people died…in order not to burn themselves or suffer from carbon monoxide.

Young man and young woman. They have neither burned nor suffocated – there are no signs of an open fire on the hardwood floor (it seems to be made 50 years ago so it should have catch fire as a straw) and soot from the smoke on the walls. They were killed by other means. Most likely, somebody broke their necks – “professionals” entertained themselves here.

Barricades were on the other floors as well. Blood on the floor. Burnt head. The red arrow: it’s possible that the killers were “borrowing” their clothing with victims. Well known stuff, simple and effective.

Note: according to one of the main versions of what happened on May 2 in Odessa, the Right Sector thugs performed a false flag operation. They put St. George’s Ribbons (symbols of anti-Maidan federalism supporters) and organized violent provocation against Maidan supporters (i.e. against their own allies), in order to later blame federalism supporters and make them look responsible for death of many people.

Dead woman near the elevator with clothes absent below her waist. Most likely, she was raped, then doused with a flammable mixture and set aflame.

People shot in the head.

People shot in the head. 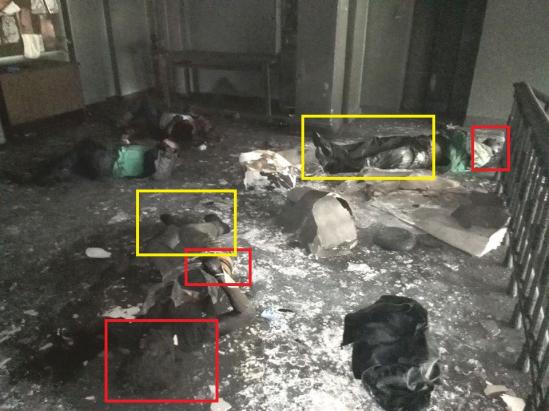 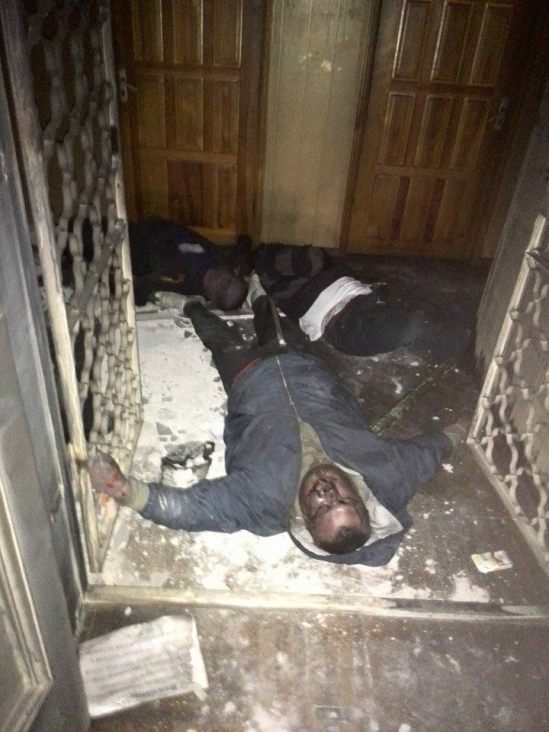 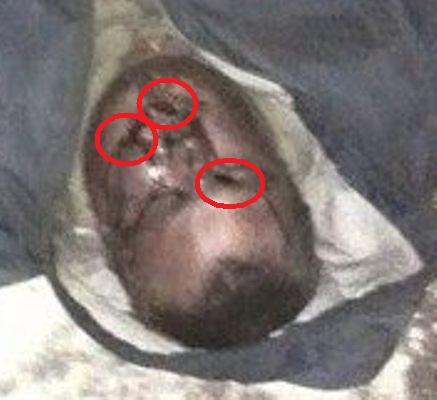 The scariest picture. Most likely it is a pregnant woman, who was one of the employees working on holidays, cleaning offices and watering flowers. She was strangled by an electric wire. She tried to resist – one can see discarded flower on the floor.

The following video recorded how this woman cried and called for help while being murdered (“HELP ME! HELP ME!” cries start at 0:20).

The sign of above demotivator that points on victim, murderer and the crime scene reads: “We offed Mommy! Glory to Ukraine!”. This demotivator has been joyfully posted by one of the Ukrainian “patriots”.

Note: “Mommy Odessa” is an affectionate nickname for Odessa, similar to “Big Apple” for New York, or “Emerald City” for Seattle.

Future mother (strangled woman) and Mommy Odessa are killed. As the whole Ukraine.

On the following video, an eyewitness says about more than one hundred victims killed inside the Trade Unions House (in Russian). 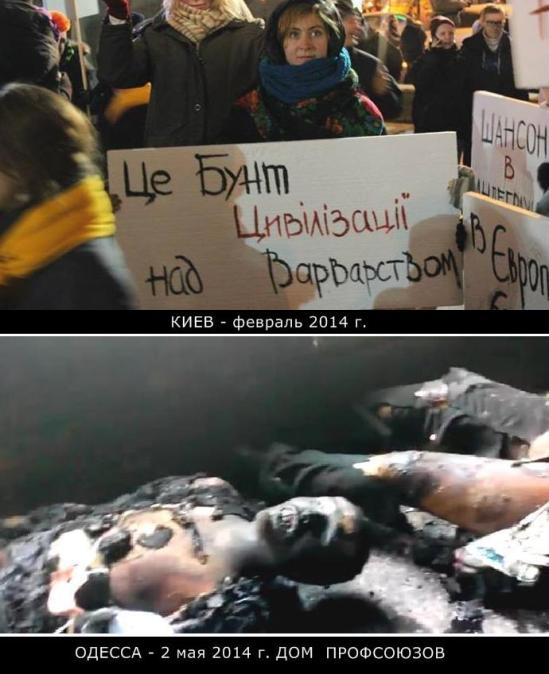 The number of killed people can be as high as 300. Most of people, especially children and women, were hashed with axes and clubbed to death with wooden sticks in the basement of the Trade Unions House: http://vlad-dolohov.livejournal.com/ 876486.html

No related posts. B

Disclaimer: The contents of this article are of sole responsibility of the author(s). The Centre for Research on Globalization will not be responsible for any inaccurate or incorrect statement in this article. The Center of Research on Globalization grants permission to cross-post original Global Research articles on community internet sites as long as the text & title are not modified. The source and the author’s copyright must be displayed. For publication of Global Research articles in print or other forms including commercial internet sites, contact: publications@globalresearch.ca

www.globalresearch.ca contains copyrighted material the use of which has not always been specifically authorized by the copyright owner. We are making such material available to our readers under the provisions of “fair use” in an effort to advance a better understanding of political, economic and social issues. The material on this site is distributed without profit to those who have expressed a prior interest in receiving it for research and educational purposes. If you wish to use copyrighted material for purposes other than “fair use” you must request permission from the copyright owner.