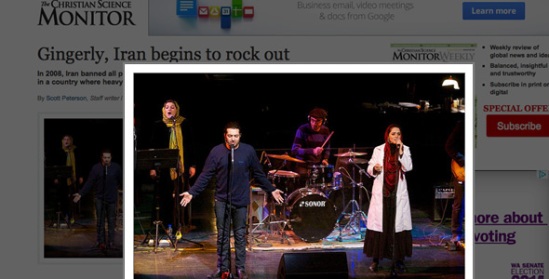 With women singing on stage and a playlist of Western pop songs sung in English during performances of ‘The Last Days of March’ in Tehran, Iranian musicians are breaking new ground, reported Scott Peterson for Christian Science Monitor.

Musicians and actors say that Iran’s culture space has opened up noticeably under the centrist President Hassan Rouhani, who was elected last year. The article by Scott Peterson highlights a number of new developments in the country. For example:

“Exhibit A is a groundbreaking show that just finished a 20-gig run in Tehran’s renowned Vahdat Hall. Redefining what is acceptable on stage, women sang solos; Western songs filled the playlist, from John Lennon to Frank Sinatra; and most lyrics were in English.

Audiences who crammed into the plush multi-story theater gasped at the spectacle, some singing quietly along as the lead female vocalist – wearing a maroon head scarf that fell to her waist – belted out Amy Winehouse’s “Back to Black.”

“From the third night, ticket sales shot up. People were very surprised… we could have doubled the run,” says Behrooz Saffarian, the musical director.”

Iran begins to rock out
In 2008, Iran banned all pop music. But a recent female solo performance signals growing freedom in a country where heavy metal musicians have been told to stay seated on stage. Article by Scott Peterson

Photo above: Courtesy of Ehsan Neghabat