Kiev does not care about civilians in eastern Ukraine, and people have to flee their homes amid daily bombings, Ukrainian refugees told RT at a temporary camp in Russia’s Rostov. It comes amid Kiev’s “lies” about humanitarian corridors, they said.

Thousands of eastern Ukrainians are flowing into Russia amid the ongoing Kiev military operation, in which the cities occupied by anti-government activists are being shelled and bombarded with heavy artillery and incendiary bombs. Even in large regional centers like Lugansk, people no longer feel safe, as cases of Ukrainian jets launching missiles at central city buildings in broad daylight have been reported.

While many men and elderly people of eastern Ukraine are unwilling to leave their native land, women with children are flocking to Russia’s cities and regions to stay with relatives or friends. Those who have neither are heading for refugee camps in Rostov.

“According to the Federal Migration Service, more than 40,000 Ukrainian citizens have crossed into Rostov Region. As of today, about 4,000 Ukrainians have been housed in temporary accommodation centers,” a local Russian Emergencies Ministry official, Aleksandr Naumov, told RT.

A Ukrainian mother holds her daughter in a refugee camp outside the Russian southern city of Rostov-on -Don on June 12, 2014 (AFP Photo / Andrey Kronberg)

Reporting from the Russian-Ukrainian border, RT’s Paul Scott interviewed several women, who said they left their husbands and relatives behind to get the children away from shooting, bombing, and air raids.

“We left because we are scared. The streets are empty – we are afraid to let our children go outside. They too got scared and nervous with the constant sound of gunfire and jets,” a woman said.

Another female refugee, who fled the embattled city of Slavyansk with two small children, shared the story of their desperate escape.

“First we fled to Nikolayevka when the bombardment got intense. They then started bombing Nikolayevka too and we fled to Artyomovsk. In Artyomovsk, almost every night there were shootings, explosions, we heard how Grad [multiple rocket launchers] were fired at some places nearby…I can’t bear those sounds anymore,” the woman said while crying. 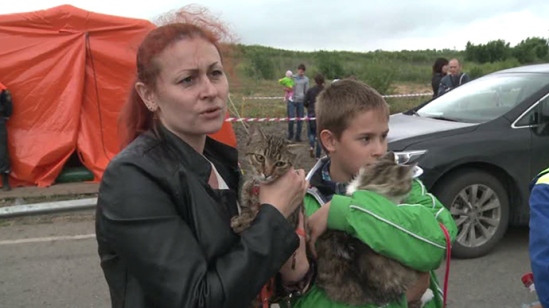 People from other regions of eastern Ukraine “are in fact fleeing because they know the story of Slavyansk,” another woman, who crossed to Russia with her two sons and cats, told RT.

“The [Ukrainian] National Guard is simply bombarding the people, killing children. We fear for our children above all, we want them to be alive and well,” she explained.

One of her sons has been having nightmares because he heard a shooting close by at night, the woman said.

According to the woman, her Ukrainian-speaking neighbors do not understand her family and support Kiev’s military operation. Moreover, the Ukrainian authorities and media are outright “lying” about civilian corridors being organized for refugees, she said.

“It is scary in this situation that the Ukrainian authorities, the Ukrainian media are lying about humanitarian corridors being organized – there is no such thing in reality. They are not letting the people leave, and the bombardments never stop. They don’t give a damn about us, the people of Donbas, Lugansk, they just need the territory,” the woman said.

OSCE Secretary General Lamberto Zannier on Thursday visited Rostov to meet with eastern Ukrainian refugees and hear their accounts of Kiev’s military operation – a move which was welcomed by Moscow. Russian Foreign Minister Sergey Lavrov said that talking to witnesses about the events in eastern Ukraine is crucial for anyone wishing to get a “full, clear and impartial picture” of what is happening there.However, Zannier outraged the refugees after saying that newly elected Ukrainian President Petro Poroshenko “wants prosperity for Ukraine and is ready to use every effort for that.” The witnesses of Kiev’s military operation responded by shouting: “No! This is not our president, we did not elect him,” RIA Novosti reported.Meanwhile, ousted Ukrainian President Viktor Yanukovich on Friday recorded a video address, in which he urged Kiev to stop the military operation.

Yanukovich, who was born in Donetsk Region, said people there are “shocked that instead of peace and stability [they got] a bloody massacre” right at the start of Poroshenko’s term.

“It is unbearable to see those deaths, this hatred incited in the not-so-long-ago peaceful country,” the ousted Ukrainian leader said. Yanukovich wondered why European leaders kept reminding him of the “unacceptability” of the use of force against civilians in the wake of mayhem in Kiev, but are now supporting the use of heavy artillery and jets against the population of eastern Ukraine.

The Russian Foreign Minister on Friday held a phone conversation with his Ukrainian counterpart, Andrey Deshchitsa, in which he reminded Kiev of its responsibility for handling the humanitarian situation in eastern Ukraine.

“Lavrov particularly stressed the importance of providing humanitarian aid to the residents of southeastern Ukraine, the creation of appropriate conditions for a safe passage of refugees to the territory of the Russian Federation,” the Russian Foreign Ministry said in a statement.

Lugansk militiamen on a road waiting for Ukrainian troops. Still from AP video

In an unprecedented move, Ukrainian self-defense forces and Kiev’s troops have carried out an exchange of dead bodies near Donetsk. However, a fragile ceasefire reached for the exchange was interrupted by shooting.

Waving a white cloth, self-defense forces of the Lugansk People’s Republic, wearing camouflage and masks, met Ukrainian troops on a road. The latter were also hold a white flag with a black ribbon over it.

The dramatic exchange took place at dawn in the eastern town of Karlivka, just outside Donetsk.

The Lugansk militiamen took the bodies of nine of their killed comrades and also 12 injured troops and handed the remains of over 100 of Kiev’s army fighters to the Ukrainian forces, “not counting those in the airport.” 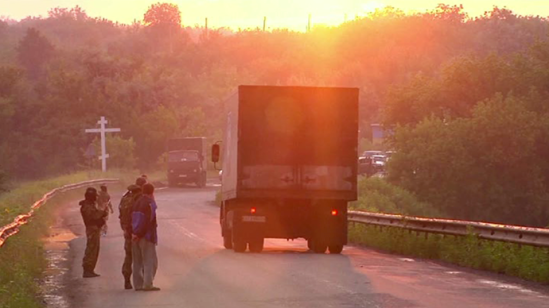 Truck containing bodies passing by on road to Ukrainian side. Still from AP video

The two sides managed to arrange a brief truce to hand over the bodies of Ukrainian troops, including those who died when the anti-Kiev troops shot down a transport plane over last weekend.

As a member of the anti-Kiev troops, who identified himself as Sova, says in the video, one of the trucks “holds 49 bodies of Ukrainian paratroopers who died near Lugansk airport. We didn’t receive anything in return in this handover,” he told AP. The bodies have been transported to the city of Dnepropetrovsk for post-mortem examination. 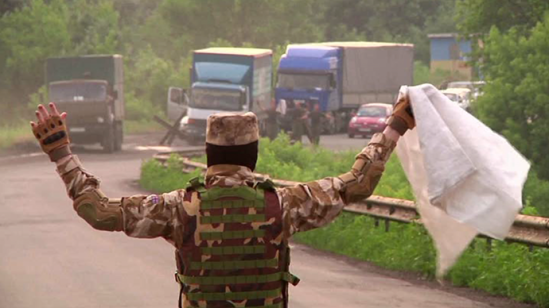 “We have fully complied with the terms of the agreement, letting them pick up their dead,” Lugansk People’s Republic representative Valery Bolotov said, adding that “it happened in Donetsk region and at our southern borders.”

After the handover, Bolotov claimed that Ukrainian armed forces “demanded $5,000 for each body.”

The Ukrainian self-defense forces want to collect bodies from another region – near the town of Shchastye – but that is impossible so far, said Oleg Tarasyuk, a representative of the Lugansk People’s Republic.

“Ukrainian army officials and prisoners’ relatives are constantly asking us for exchanges. We are considering their offers,” he said.

A five-year-old boy died in eastern Ukraine of multiple head wounds Friday from a Ukrainian mortar shell, despite a 5-hour-long operation by doctors to save his life, Russian media report. His mother died on the spot in the same mortar shelling.

When Arseny Danchenko was admitted into the hospital Thursday, doctors found at least 30 head wounds caused by mortar shell fragments from one to five millimeters in diameter. Many of the wounds were declared inoperable, yet surgeons attempted to do whatever they could.

“Arseny died at 2am last night. Medics tried to save his life for over five hours,” Russian daily newspaper Komsomolskaya Pravda reported from the hospital.

On Thursday evening, Ukraine’s National Guards artillery, stationed on the Karachun mountain, rained a barrage of mortar shells on the Golubovka suburb of Slavyansk.

Arseny’s mother, Nadezhda Danchenko, 29, ran out into the courtyard to grab her son and hide in the cellar. But as soon as she picked her son up in her arms, a shell exploded right next to her, killing her immediately.

“My daughter screamed that the shooting began,” Nadezhda’s mother told Russia’s LifeNews TV. “I told her to get to the cellar. We heard explosions, and she rushed out. At that very moment, the shell came. And now she’s gone.”

The chief doctor at the hospital in Slavyansk, Arkady Glushchenko, told the channel straightaway that the chances to save Arseny’s life were slim, with “so many fragments stuck in his brain.”

Apart from the Danchenkos, seven other people were wounded in the same artillery barrage, including a man and a woman with fatal wounds, who died later in the hospital, which was packed to overflowing.

Glushchenko said that all the people hospitalized with mortar injuries were civilians.

“I do not comprehend what is going on,” he said.

“When are these killings going to stop?” a relative of Danchenko’s said. “When will they leave us alone? When will they let us live the way we used to? Why are they killing us?”

Witnesses told LifeNews that the Ukrainian army was using heavy artillery and that shells are exploding in and next to the settlement every day. Residents of Golubovka said that shells are incoming simultaneously, three to four at a time.

A house damaged by fighting between Ukrainian and and anti-government forces is seen in the eastern Ukranian city of Slaviansk June 16, 2014. (Reuters/Shamil Zhumatov)

“Every night we go to sleep listening whether they are starting to shoot or not,” a local woman said. “They’re shooting all the time from two locations, Karachun and Rybkhoz. I don’t know how to live here anymore.” She added that on Thursday the Ukrainian artillery was shelling some other targets, then all of a sudden, without any ranging-in shots, the shells began to land in the yards of apartment blocks.

Local residents walk near a house destroyed during a night combat between Ukrainian and anti-government forces in the village of Semenovka, near the eastern Ukrainian city of Slavyansk, on May 23, 2014. (AFP Photo)

Ruslan Khakimov, Nadezhda Danchenko’s husband, said that Ukrainian authorities should come see the material evidence of the shelling and “draw their own conclusions.”

“We’re not going to leave Slavyansk so easily now,” he said.

The humanitarian crisis in the eastern Ukrainian city of Slavyansk is worsening by day by day, with disruption of water supplies and electricity amid continuing fighting.

A destroyed house following what locals say was overnight shelling by Ukrainian forces is seen in the eastern Ukrainian town of Slaviansk June 10, 2014. (Reuters/Gleb Garanich)

On Tuesday, Ukrainian President Petro Poroshenko declared that he was ready to order a temporary unilateral ceasefire, but since then the Ukrainian army has not shown any sign of ending its military campaign.

A woman stands in a cafe burnt during a night combat between Ukrainian and anti-government forces in the village of Semenovka, near the eastern Ukrainian city of Slavyansk, on May 22, 2014. (AFP Photo)